Clunker Guns and Kidneys: The Losers no one Talks About 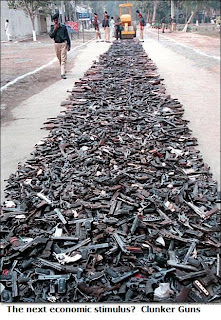 This month, I bought a used car. I didn’t get a used car from a big dealer. I wanted to pay cash. My price range was $8-12,000. After I shopped around, it became clear that I should have bought a few months back.

I had a good conversation with a couple of the dealers. I specifically asked them, “What has been the effect of the Cash for Clunkers on your business?” “Terrible”, they said and I paraphrase, Before cash for clunkers, I used to be able to get my cars for cheap, now I am paying $1-2,000 more per car. I just hope that I can sell at the higher margins because it has been very slow. No one wants to buy at the higher prices. They want to wait until the program is over and they can get cars for cheap again.

CNN reports that over 690,000 used cars have left the market, which equates to a 2% reduction in used vehicles in the marketplace (based upon sales of 16MMin 2008). The program drove up prices in the short term and I have yet to hear of the prices returning to normal.

As is almost always the case with government subsidies, the winners are well known. Alan Blinder’s original Op-Ed in the NY Times coined the term “Cash for Clunkers” and wrote about the benefits of just such a program. In doing so, he failed to list the losers. This was fundamentally dishonest or sloppy or both. That is why I, your humble blogger, have outlined the losers below. The winners of course, are the new car retailers, manufacturers, and employees. And of course the person who has been gifted the taxpayers’ money. A silent winner is the salvage yards, which have seen their business go through the roof. But I want to spend my time on the losers.

The Losers No One Talks About

The US Taxpayers of course. Edmunds.com estimates that only 125,000 of the 690,000 new vehicles purchased under the program, would not have been sold anyway. Most people just moved up their purchase. That adds up to a subsidy of $24,000 for each of those 125,000 cars sold. Some Stimulus. If you spread that across the 40% of Americans who pay income taxes, that is about $23. If someone would have come knocking on your door asking for 20 bucks to stimulate the economy by giving it to the car companies, they would likely have shown a boot.

The Working Poor. Most working poor do not drive old SUVs, and even if they did, they still would likely struggle to finance a new car, with or without the additional cash. The working poor buy used cars and they will be paying $1-2,000 more for a used car this year. If you scoff at my anecdotal figures, WSJ reports that wholesale prices for vehicles are up 19% from December 2008. Kelley Blue Book reports on their website that the pricing for used cars has increased dramatically and is likely in a bubble phase. Interestingly enough, this subsidy was sold by Alan Blinder in his Op-ed piece in the NY times as a democratic equalizer of income. It is hardly an equalizer of income if you factor in the stealth poor tax of $1-2,000 per vehicle (about 10-20%). Some equalizer.

Your local Kidney Dialysis Center. Many of these clunkers would likely have been donated to a local charity. San Diego Union Tribune reports that one Charity, Father Joe’s Villages, saw their used car donations cut in half. Father Joe Carroll of San Diego said that his charity donations, which gives medical services, housing and advice to homeless families, will likely be down by 3.6MM by the end of the year. The American Lung Association of Utah estimates that donations are down by up to 60% for the year. The national Kidney Foundation of Utah estimates a drop of up to 15%.

Used Car Retailers. From my interviews with the dealers, they are suffering now from significantly higher prices in the used car auctions, coupled with reduced demand. WSJ reports that the used car inventory is significantly down and used car prices significantly up.  Those consumers that rely on out-dated cost books aren’t willing to pay up. Some of these small independent auto dealers, which number between 40-45,000, will leave the business. Others will struggle to maintain profitability as sales go down 20% or more. Still others have stopped buying cars at the auction and are just trying to rid themselves of their existing inventory.  And the pain will only get worse when the bubble bursts and they actually have to take a loss on their inventory.

Your local mechanic. Obviously, when your business model is to fix clunkers, you like clunkers. It is hard to imagine that 690,000 less used cars had zero impact. The automotive aftermarket is a $250 billion industry that employs about 4.6 million people. WSJ reports, "This package will hurt mechanical repairs without question. You are taking older vehicles that are still fine to use and removing them," said Robert Redding Jr., the Automotive Service Association's Washington representative. "If you're taking hundreds of thousands of vehicles that you normally service off the road with no consideration, it hurts people." It hurts mechanics.

From a jobs perspective it is a wash. I’m sure that President Obama counted the jobs “created or saved” in the auto sector, but to be honest, he must include jobs lost at the used car retailers and the mechanics. I really don’t think that he included those numbers.

From an economic equalizer perspective, it failed. I don’t think that the rich participated much in the program as they likely have very few clunkers.  The middle class made up the majority of the participants. What is clear though is that the poor were likely made worse off due to an increase in used car prices.

As a stimulus it failed. The program alone was supposed to have been responsible for roughly 1.2% of GDP growth in the third quarter. However, if 80% of those purchases would have taken place anyway, aren’t we just robbing from fourth quarter earnings? Real growth comes from productivity gains, and in this case, there weren’t any. As a stimulus, it accounted for .24% of incremental GDP at the cost of $24,000 per car.

From an environmental point of view, it probably will have the desired effect. But the costs are spread out so thinly it is difficult to gauge the value.

But by any means, the stimulus logic doesn’t pass the smell test. By that same logic, I could take Warren Buffet’s money, use it to buy guns over 10 years old, and distribute that money upon the purchase of new, more efficient guns. I think you would get the vote of the gun manufacturers, hunters and the drug runners, but no one in their right mind would say that it was stimulating the economy.
Alan Blinder Barack Obama Cash for Clunkers Jobs Kidneys Poverty Taxpayers