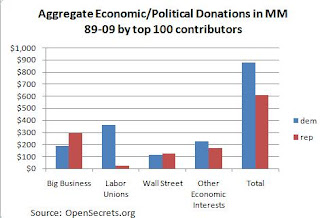 Listening to a Democrat speak can sometimes confuse the lay person. Democrats talk like they support the man on the ground over big business, like the knight in shining armor to slay the corporate dragon. The trouble is, it is almost never that way in reality. Almost all democratic policies lead to less competition which ultimately is a boon for those companies which are able to survive. This leads to reduced competition for those who can bear the burdens of increased regulations.

Looking at a list of the top contributors disabuses us of this façade. The first façade is that the Wall Street was a lassiez-faire Republican bastion. The data don’t tell that tale. Wall Street – defined as a company that makes a significant portion of their earnings through financial services – was split evenly between the democrats and republicans. Big business – defined as a non-financial services company – did tend to break towards the Republicans in a 60/40 split. If you include Big Labor and trade associations – as I would – the tilt is increasingly towards the democrats. Unions alone gave more than 90% of their money to the democrats. The reason that I would include the unions and trade associations as part of big-business, is because it instrumental in shaping the legislation that comes before congress and as I will show below, it is often in the interests of the companies themselves.

Big business likes big barriers to entry. Big business does not stay up worrying about the next piece of legislation, they worry about the next entrepreneur with a good idea and solid funding. Anything that makes it more difficult for small business, is good for big business. The following causes, make life more difficult for small business. As you will see, they are overwhelmingly supported by Democrats

Only big companies can afford unions. Big Companies like trade unions. They only have a problem if their competition does not have to submit to unionization. That is one reason why Wal-Mart was so vilified. They were one of the few glaring examples of a company getting big without having to unionize.

Big businesses will always talk out of both sides of their mouth on this issue. The big-3 car (or is it big 1 now) companies were always publicly saying that they did not like regulations. But, they were one of the biggest supporters of CAFE standards which set emissions targets. They knew that they could afford to make cars according to the higher standards. New cars from smaller companies would have a harder time.

The less competition that a company has, the more the power (or rent) shifts from the customers to the firms themselves. The more monopoly power they have over their customers. That is why a call to the power company is not very different from a call to the DMV. Do you remember the customer service that we got from the phone companies before the deregulation? Right after national deregulation, the states maintained a quasi monopoly over the intrastate long distance phone calls. For a while, it would cost double to make a call from Dallas to Fort worth as it would cost to call Denver. The only reason was deregulation made the landscape more competitive.

That is why the whole health care debate is a train wreck for conservatives. I hear them defending the greatest health care system in the world, i.e. the status quo. The status quo is a quasi monopoly, with one insurer controlling more than 90% of some state markets. There is nothing in the bill that will bring costs down and service up. The single biggest thing they could do to make the costs come down is deregulation. That would bring new money and competition into the space. But let’s not kid ourselves into believing that the US health care system is competitive. It’s not.

You want competitive, go to Singapore. In Singapore, health care is subsidized, as it is here, but costs are very low. Every decision is made by the patient. In fact, on the bill, you have the amount of subsidy paid by the government, which is about 10%. When I lived in Singapore and my wife was pregnant, a trip to the emergency room only cost about 100 Singapore dollars, (roughly 50 USD at the time). The government subsidy was only 10 Singapore dollars. Far cry on how I would leave the emergency room without insurance in the States.

Hence, to change the system from what it is, a quasi monopoly and change give the government even more control is a mistake. But, that is exactly what the Democrats want. Big government and big business. The only problem with the faustian bargain of business getting into bed with the Democrats is that they may feel safe now, but eventually, eventually they will kick everyone out but themselves.