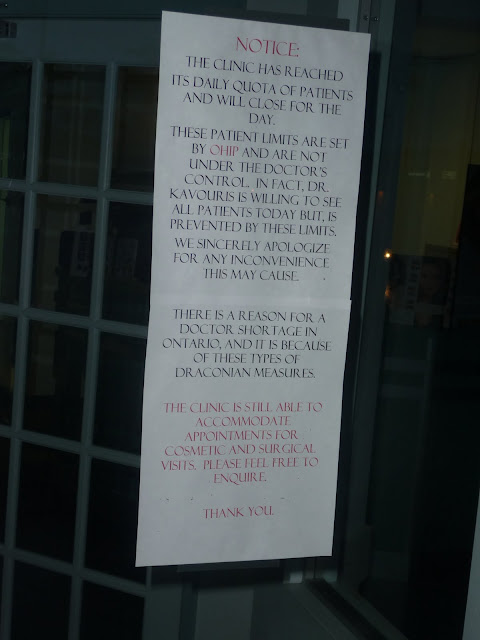 Anyone who follows this humble blog knows that I live in Canada, Toronto to be exact.  I will show you how Canada's single payer system works first hand.  This picture was taken from my own camera, in Etobicoke at a walk-in clinic just off of Queensway and Park Lawn.  Feel free to use this, but source it back to me.

Canadian Health Care, How it works on the Ground

It is illegal to get any medical service without first getting an authorization from your family doctor.  Upon arrival into Canada, I was given a list of family doctors who practiced in my area.  The list had about 300 doctors on the list.  After the name, address and phone number on the list, there was a field for "Receiving New Patients".  Out of 300 doctors, there were only about 7 that were receiving new patients.  It gets worse.  I called the doctors on the list.  Every single doctor was full.  I was given a referral by another doctor who said, "Call my friend, he is full, but if you tell him I sent you, he will see you."

As my son was running a fever and had stomach pains, and we had no family doctor, we decided to take him to the walk-in clinic in the afternoon.  That is when I saw his sign on the window.  It wasn't really an emergency, but I had no choice but to take him to the emergency room, as I would have had to wait through a long weekend.  Well, I wasn't the only one in that situation and the emergency room was full of sick kids, who likely were in the same situation as I was.  We arrived at 7:00 PM.  My name was called at 5:00AM the next morning.  They put us into a room because the nurse says she doesn't like to see people sleeping on the hospital bench.  At 7:00 AM the nurse had a look at my son.  At 8:00 AM, they conducted tests.  At 11:00, they came back to us and said that we could go home and they would have the results in two weeks.  Every time that we have been to the Emergency room the wait has been over 8 hours.

It was all free to me, but you either pay in money or you pay in time.
Canada Obamacare