By EconomyPolitics - November 06, 2009
October 16, 2008, Warren Buffet made a compelling case for buying US equities in his Op-Ed piece in the Wall Street Journal. Since then, we have seen a rally in the US Stock Market, which is up by 10 percent. From the onset of the financial crisis, the busybodies in the White House, Congress, Treasury and Federal Reserve have been busy saving our asses. We have had Bush/Obama bailouts, Stimulus Packages, TARP, TALF, Fed Quantitative Easing (did I miss one?). Now the US is discussing Cap and Trade, and Health Care reform, both of which will are supposed to create jobs but also require some kind of tax increase.

If we look at the returns from the market, we might be tempted to agree with the busybodies. Investors are coming back as the stock markets have gained considerably over the last few months. The rally is undeniable if you are looking at a nominal return. The problem is that the US no longer exists in a bubble. Other countries can compete to be recipients for worldwide investment. The US still has a large percentage of financial assets so any significant money flow will attract additional US investment, which would cause assets to rally, but look again at the numbers, and you tell me if investors are looking first at the US to invest, or as a last resort.

The money has been gushing into the US Equities markets. The problem is that it is going every place else first.  For example, the graph below shows that although the US equities market is up, it can hardly be considered an endorsement, especially when compared against emerging market equities which are shown below. European equities, as can be seen in the CAC 40 index is not shown but is similar to the US returns. What is obvious is that emerging markets are on a tear. Even little old Canada is besting the US returns of the S&P 500. 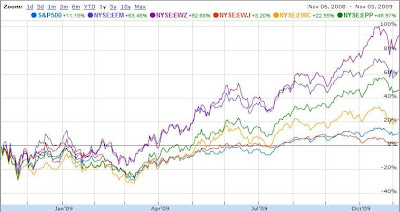 However, since we have all these indices published in dollars, how much of their rally might be explained in weakness of the dollar? As it turns out, quite a bit. See the basket of currencies below against the dollar. Of our main trading partners, only Mexico’s currency has underperformed the greenback. Quantitative easing has put downward pressure on the dollar. This has made foreign goods more expensive. The difference in prices has caused inflation in the true sense of the word, even though that inflation has not translated into higher CPI numbers, but hell, the Fed missed the rampant inflation in the housing market and they are probably going to be behind the curve on spotting inflationary bubbles the next time around as well. 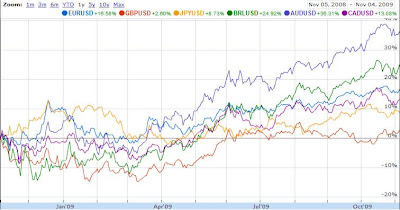 If you really want to see how people feel about investing in the US, you cannot ignore the relative strength of almost every other major world currency. And it really goes beyond that. Almost all other commodities are more expensive now than they were a year ago in dollar terms, except energy (see below). The big one to follow of course is gold**. Gold more than any other commodity, is seen as an alternative store of value, and is a place where Sovereign States are the major players. Foreign governments, most recently India, have been buying up the yellow metal which allows them to diversify out of the dollar. I expect China to follow suit. 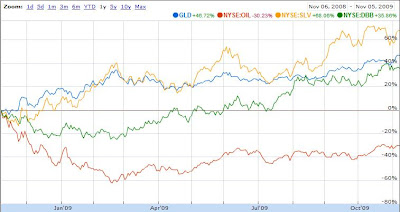 What this says is that in spite of the US stock market being up, almost every other financial asset is up as much or more. It does not show confidence in the United States economy in general and the stock markets in specific. Coming next to last place in the world economy in terms of markets performance of financial assets cannot be seen as a ringing endorsement in any stretch of the imagination. It must be taken for what it is, an extreme lack of confidence in the US.

** In the interest of full disclosure, I do hold a position in GLD
Bailout Brazil Commodities Dollar Dow Jones Euro SnP500 Stimulus