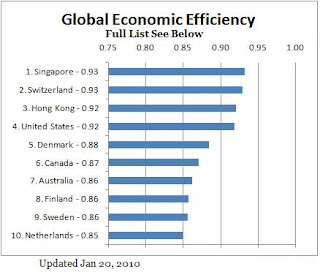 In doing country analysis for international investments, it is often a first step to look for indexes which assign values to sovereign attributes to gauge risk and assess opportunity. Investors look for a countries and markets that have a good deal of economic freedom and a certain degree of judicial certainty towards the investment community. There are plenty of indexes by many different sources, each one looks at important factors which could influence returns and hurdle rates. I have looked into five of such polls and compiled an index which uses the them as inputs into an index to measure efficiency.  I have included information on the five economic indices and methodology below.

Fraser Institute: Economic Freedom of the world
http://www.freetheworld.com/release.html
Per the Fraser institute, the index published in Economic Freedom of the World (EFW) is designed to measure the consistency of a nation’s institutions and policies with economic freedom. The key ingredients of economic freedom are:
• Personal choice
• Voluntary exchange coordinated by markets
• Freedom to enter and compete in markets
• Protection of persons and their property from aggression by others.

These four cornerstones underpin the design of the index. Put simply, institutions and policies are consistent with economic freedom when they provide an infrastructure for voluntary exchange and protect individuals and their property from aggressors. In order to achieve a high EFW rating, a country must provide secure protection of privately owned property, even-handed enforcement of contracts, and a stable monetary environment. It also must keep taxes low, refrain from creating barriers to both domestic and international trade, and rely more fully on markets rather than the political process to allocate goods and resources.

Heritage Foundation: Index of Economic Freedom
http://www.heritage.org/Index/Ranking.aspx
Per the Heritage Foundation economic freedom is the fundamental right of every human to control his or her own labor and property. In an economically free society, individuals are free to work, produce, consume, and invest in any way they please, with that freedom both protected by the state and unconstrained by the state. In economically free societies, governments allow labor, capital and goods to move freely, and refrain from coercion or constraint of liberty beyond the extent necessary to protect and maintain liberty itself.

EconomyPolitics Methodology
To come up with an effective way of comparing the different indices, we first eliminated any countries that were not in common. We them set them to the same scale, where the lowest country rank is set to zero on the scale and highest to one. Then their relative positions are weighted by the corresponding index, not the ranking to preserve their relative positions. Also note that IMD had less countries that we felt were important to include. In the case that there was no score for IMD, we used an average of the four remaining indices. We compensated for this by weighting the lowest country on their scale, Venezuela at 25%, which is roughly where it is on the other scales.

For media inquiries into the EconomyPolitics Index of Indices, please contact Taylor Cottam, at tcottam@yahoo.com. Please feel free to use the full index, but must source back to EconomyPolitics. 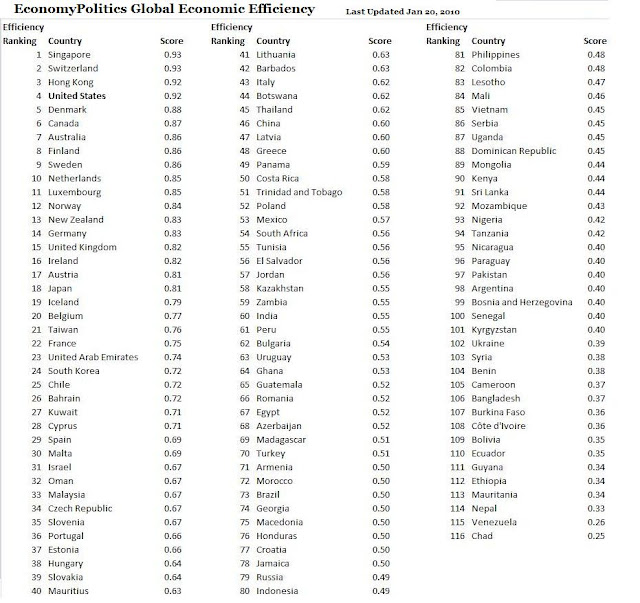