Get the Bastards: The Futility of Executive Pay Limits 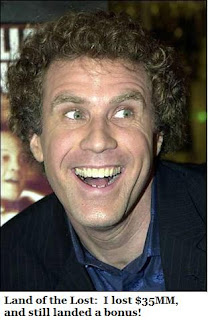 Ken Feinberg, an unelected czar in the Obama administration, has mandated that on mid-level executives of companies receiving significant federal bailout money will have their cash salary capped at $250,000 under a revised financial compensation plan, with no less than half of their total compensation coming in the form of stock options that will not vest for at least three years. The rules did not even have to be debated nor approved by Congress. An executive salary cap mandated by the Federal government is uncommon not unprecedented, but with all such follies, they are at best ineffective and worst harmful to the affected companies and economy in general.
On executive pay Obama explicitly rebuked executives, "the people on Wall Street still don't get it. ... They're still puzzled why it is that people are mad at the banks. Well, let's see. You guys are drawing down $10, $20 million bonuses after America went through the worst economic year ... in decades and you guys caused the problem,"  This hasty “Get the Bastards” response is quite natural. After all, didn’t they cause the near shutdown of the economy? Well, yes, and the punishment should have been bankruptcy. The last time we tried a hasty “Get the Bastards” approach, US small businesses got saddled with Sarbanes Oxley.
Simple economic theory would say that since labor is not immune to the law of supply and demand, three things will happen: talent will go elsewhere, benefits will increase, quality of work will go down. Let’s have a look at the real world to see if this has actually happened.
Talent Leaves:  Adios AIG

Blomberg reported this week that at least five AIG executives have threatened to resign due to pay caps, including, the General Counsel, the head of a non-U.S. life unit, a senior VP of financial- products, head of the non-U.S. property casualty, and head of U.S. property casualty. The CEO Robet Benmosche, threatened one month earlier to leave due to pay restrictions. Limiting pay in this case was so harmful, that the Pay Czar had to renege on the pay caps or risk substantial injury the firm. Check.

Benefits Increased:  Hello Employer Health Care
Goldman Sachs recently announced that they will scrap cash bonuses for executives in favor of stock options. Good Timing. They claimed it was to align shareholders and managers, but since the Pay Czar claimed authority to regulate pay over non-TARP, non-financial companies it is likely that concern over cash bonuses had a significant influence. The last time that the US set direct pay caps on pay was during World War II, where FDR set maximum wage limits. To compensate workers, companies began offering health insurance. Thus government meddling in the free market, has given us the awkward mess of employer provided health care insurance. Thanks and Check.

Quality Decreases: Calling the Bluff
It is difficult to quanitatively measure the effectiveness of labor, however, one can safely assume that the AIG executives that threatened to leave would have been replaced with someone of lesser quality, otherwise, the Pay Czar would not have reneged on the original proposed pay caps. After all, it is his stated goal to have companies healthy enough to pay back the TARP fund. Check.
Why it Matters
“What is the big deal?” you might ask. “It is just pay on the financial firms that have received financial assistance from the Treasury”. Well, if the Treasury can mandate pay for firms that have received assistance, that leaves a big opening for reckless behavior by current or future Pay Czars, after all, Democrats like to associate tax-breaks as Republican goodies. With the current loopholed tax structure, that leaves a lot of industries and individuals vulnerable to potential pay regulations.
Ironically enough, one of the big beneficiaries of congressional largess has been Hollywood. Ben Shapiro of Big Hollywood reports, “the October 3, 2008 spending bill …, Hollywood received a $470 million tax break. President Obama’s stimulus bill had a $246 million tax break for Hollywood in the first draft; Republicans removed it.” Does that leave Hollywood open to Bonus Clawbacks?
AIG Barack Obama Big Hollywood Executive Pay GM GMAC Ken Feinberg Pay Czar Will Ferrill