Will Health Care Taxes make the US an Economic EuroZombie?

By EconomyPolitics - December 04, 2009
Many tax-conscious Americans are rightly concerned that the tax burden imposed by the current health-care proposals will transform the United States into a high-tax country similar to our Socialist comrades in the EU. To some extent, that is what the tea partiers feared. They have a point, but the truth is, at the margins we are already there.

The Marginal Tax Rate is What Matters 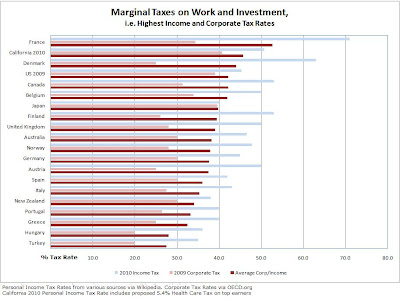 The incentive for an individual to work and a company to invest depends upon the tax rate on the next dollar earned. The higher the tax rate on their next buck, the less likely they will be to buy a machine (or hire a worker) to grow their Net Income. The higher the marginal personal income tax rate, the lower the incentive to work more, invest in education or find a higher paying job.

Furthermore, it is those with the highest income (both personal and corporate) that have the greatest capacity to invest in businesses, create tangible value and economic growth. It goes without saying that you don’t go to the poor or even the middle class to find a job. You look for companies and individuals that have healthy cash flow. That is why the top tax rates matter. There are numerous comparisons of tax rates and tax bites, but I haven’t seen one that looks at the top marginal tax rates by country both individual and personal. Those tax rates are important as the engine for future growth, and by those measurements, the US has fallen behind to Socialist Europe.

How is this possible? The US has always been a beacon of low taxes. That is still somewhat true. In Europe the middle class is taxed higher via personal income taxes. However, the US has shifted that burden away from the middle class, to the top earners and corporations, i.e. the job creators. If you look at the effect of a 5.4% tax on the highest earners, the average of California’s personal and corporate taxes is only beaten by one country in the OECD, France. Yes, even Socialist Denmark has lower taxes when you factor in the corporate tax rates which are much lower than in the US. In fact, the US, has the second highest corporate tax rates in the world, and, when you factor in the corporate State Taxes, there are 23 states that by themselves would qualify as the most expensive corporate income tax jurisdictions in the world. Why any company that had a choice would choose the US as a tax jurisdiction is beyond me.

The Leader of the Free World

The advantages are so obvious, and so many firms are moving headquarters overseas, that politicians have finally realized that they must do something. In true Washington form, they decided that instead of reducing taxes, they would tax companies’ overseas profits. That would be unprecedented because, according to the WSJ, almost no other country taxes overseas profits. “That could never happen here”, you might say. Au Contraire, Mon Frère. It already has for personal income taxes. The US one of the only countries in the world that taxes its citizens regardless of the tax jurisdiction where they are living. There is no tax haven for US Federal income taxes. Extending that to Corporate Net Income taxes would a no brainer, passed in the name of fairness.

As you worry about the tax implications of the current health care debate, realize, that much of the incentives that drive away investment are already in place. Congress dithered while Socialist Europe and the world woke up and became more competitive. The 5.4% increase in the marginal rates could be the straw that breaks the camel’s back and places us in uncharted territory, a true leader in world. For some reason, I doubt that is what you had in mind when the President Obama claimed the desire to restore American leadership in the world.
Barack Obama Europe Investments Obamacare Taxes