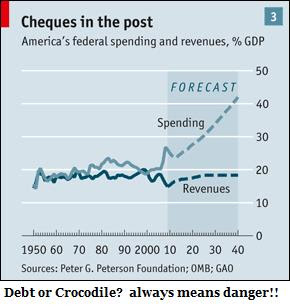 We are calling this piece The Debt Crocodile: Losing my Mojo III.  The above graph looks just like a crocodile with it's mouth open.  I can't decide wether it's swallowing it's food, yawning or pouncing on its prey.  Either way, its always dangerous.  As you can see, the forecast spending vs Revenues is unsustainable.  If this were a person, we would say they were completly financially irresponsible.  The only way to fill the gap is to collect more revenues via taxes or increased debt. Without spending cuts, or tax increases, bankruptcy is imminent.   It is also important to know that these are forecast spending.   How many actually trust that the gov't will keep up with their spending forecasts, especially with Health Care hanging over our heads.

We did in December a piece about how the US has lost its competitive tax advantage to Europe of all places.  What?  Yes, with the proposed health care taxes, the US has higher marginal tax rates than Europe (See http://bit.ly/7sCNXl)?  This week, we did a piece on the Heritage Economic Freedom Index, where the US has slipped in its Freedom Score (See http://bit.ly/8iS369). It is extremely disturbing that the US is no longer considered to be a "free" country by Heritage.  It is now only cosidered "mostly free" (See Heritage site http://bit.ly/65rIHh).  Did you catch that?  We are no longer a "free" country, as determined by Heritage.

In addition to EconomyPolitics and Heritage, the Economist has also weighed in saying that the growth of the United Sates must stop its spending binge (See http://bit.ly/6sBHPG).  You know that it is pretty bad when the Europe is Chastising the US over spending (See Graph Below) 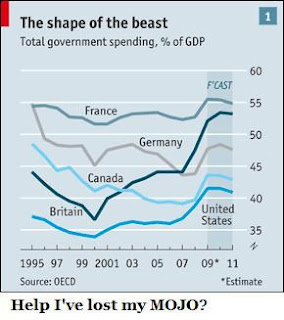 One thing that stands out to me is how different the United States once was from Europe.  The gap between American public spending and Canada’s has tumbled from 15 percentage points in 1992 to just two percentage points today.  As the Economist and Heritage have pointed out, the United States is in the process of transforming itself into a socialist slowpoke.  Don't get me wrong, I am not pretending the United States is on the road to destruction, but instead, it is losing its raison d'etre. and could cease to being a world magnet in terms of talent and capital.  Economic growth would slow from 3% down to the European norm of 1.5%.

The Economist explains below


Today big government is back with a vengeance: not just as a brute fact, but as a vigorous ideology....  America’s financial capital has shifted from New York to Washington, DC, and the government has been trying to extend its control over the health-care industry....  The obvious reason for the change is the financial crisis. As global markets collapsed, governments intervened on an unprecedented scale, injecting liquidity into their economies and taking over, or otherwise rescuing, banks and other companies that were judged “too big to fail”. A few months after Lehman Brothers had collapsed, the American government was in charge of General Motors and Chrysler (and a host of financial firms).


As the recession ends, and the real economy begins to take shape, it is obvious that the model emerging is disturbing:  State Capitalism, or Crony Socialism.  Take your pick, but neither is very appealing.  Per Heritage, we may not be the Land of the "Free" any longer, but we still are the Home of the Brave.  We'll need it, because it will take a lot of courage to kill that crocodile.