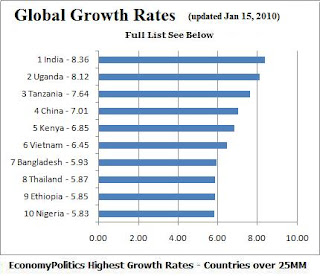 Estimating next year’s GDP growth is hard to get right. Just look at something simple like the US employment rate. The brightest minds in America suggested that the peak would be 8% unemployment How difficult is that to get right? To an investor looking to place capital, it is easy to confuse next year’s economic growth with long term potential. As we are no likelier than the next economist to “get it right” in the short term, we have chosen to focus on longer–term trends, i.e. the ten year growth rates, which in the end dominate.

Yes, we have chosen many African countries as places with the greatest growth potential over the next 10 years. Although not used to being placed on such a pedestal, it does have many things going for it. Demographically, it is growing. Consequently, even if GDP per capita remains flat for 10 year, Kenya will still enjoy almost 3% GDP growth for much of the decade. Secondly, it is very poor. Most people would not consider that a virtue, but in terms of economic growth it means greater potential to capture a “catching up” premium. Thirdly, some countries are finally starting to get it right. Good government, economic freedom, infrastructure and a more positive regulatory climate, while still not perfect, are moving in the right direction.  Because they are collectively low on the scale of economic efficiency (See http://bit.ly/7gYg4d), any increase is rightly viewed with skepticism.  However, when it is apparent that the changes will stick, much of the gains will already be had.  I am optimistic this next decade will see a number of fast growing African countries.

But don’t take our word for it. Sub-Saharan Africa has been growing for the last few years on average 7%, and that includes countries like Zimbabwe that have had negative growth (See http://bit.ly/5IZYby). The CIA Factbook shows that Countries like Kenya and Nigeria have shown growth above 6% per year for at least two of the last five years. The wise investor would look for growth as it was happening, not catch it as the world does.  The Economist has also predicted growth in the African capital markets which is coinciding with an increase in transparency (See http://bit.ly/8Y0IRs).

Countries with lower GDP per Capita have a higher long-term growth potential. As less developed countries make the right investments in infrastructure, they grow at a higher rates than developed countries making a premium when they are in “Catch Up” mode. Case in point China and Malaysia have captured huge growth premiums while they are in catch up mode. However, it does take time. In my estimate, a country with high economic efficiency, should be able to progress from a completely impoverished country to developed in about 40 years. That was about how long it took Japan and Europe.

Countries that are more free grow faster than those that do not. EconomyPolitics has compiled a freedom index that includes infrastructure, trade freedom, monetary policy, etc (See http://bit.ly/7gYg4d). This input becomes an exponential multiplier of how much of their growth potential they are able to achieve.

Why is the US so far down?

The US is very far down the chart mostly because they have a very high standard of living compared to the rest of the world. We can’t catch the catching up premium because we are already more developed. The EU as a whole has a higher potential growth rates because countries in Eastern Europe have a higher potential for growth potential. Even countries that are less free but have some room to catch up, e.g. France or Netherlands will have similar long-term growth rates.

Why has China’s Growth Rate Slowed Down?

We are expecting China’s growth to temper down to about 7% a year over the next decade, realizing that there are going to be some years where it could be in the double digits. Given that the Chinese GDP growth rate has averaged about 9% over the last decade, it is time for some more sustainable growth. As an aside, if you put China back at its previous GDP per capita of ten years ago, which is less than half of where it is now, the model predicts double digit growth rates.

Also smaller countries like Singapore and Hong Kong have experienced higher growth than what is predicted by the model. Please bear in mind that these are 10 year predictions, and that due to these countries placement, they are poised to capture some of the growth that comes from being next to countries with high growth potential e.g. China and India which is not captured in this model.

Feel free to use this information but must credit EconomyPolitics. For investor or media questions inquiries, contact Taylor Cottam at tcottam@yahoo.com. Full data set available upon request. 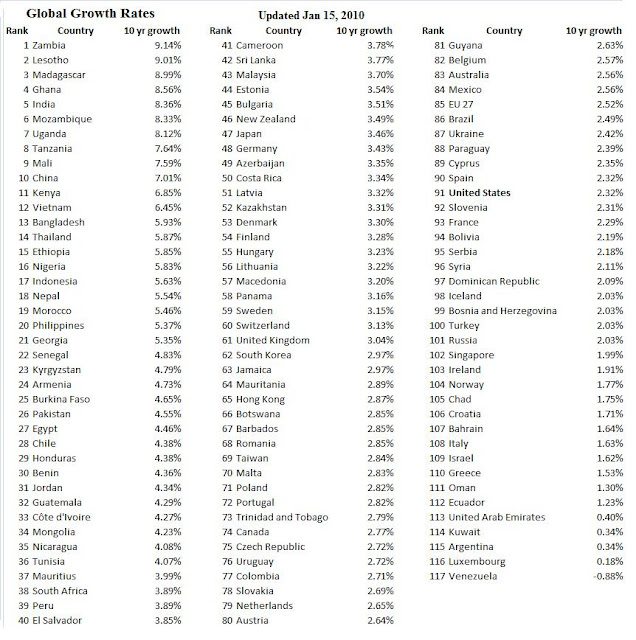