The Minimum Wage and Democrats: Screwing Blacks for over 70 years 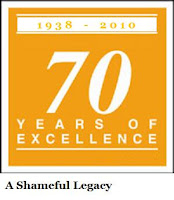 The best thing that we could do to honor Martin Luther King’s legacy would be to repeal Federal Minimum Wage laws. As a big admirer of Martin Luther King’s legacy, I thought I appropriate to discuss the effects of a particular piece of legislation upon the African American Community. Federal Minimum wages have over 70 years of putting the government between the employer and employee.

Brief History – It was Once Deemed Unconstitutional

The first attempt at establishing a national minimum wage came in 1933, when a $0.25/hour standard was set as part of the National Industrial Recovery Act. However, in the 1935 court case Schechter Poultry Corp. v. United States, the United States Supreme Court declared the act unconstitutional and the minimum wage was abolished. The United States Constitution only gives the Federal Government the right to regulate interstate trade and Schechter Poultry Corp only did business in its home state.  The minimum wage was re-established in the United States in 1938 (pursuant to the Fair Labor Standards Act), once again at $0.25/hour ($3.22 in 2005 dollars). It had its highest purchasing value ever in 1968, when it was $1.60/hour ($9.12 in 2005 dollars).

Does it help the working poor?


Who is the minimum wage intended to help? John Sweeney, AFL-CIO was quoted as saying, "I'm so sick of hearing that the minimum wage is about teenagers and high school kids," he said. "It's people who are working, raising kids, it's single parents.” The proponents of the legislation say it supports working poor families. The data state otherwise, via heritage:

Well then why have Federal Minimum Wage Laws?

However, just because it is ineffective at increasing the standard of living of the target, doesn’t mean it is completely impotent. It is a powerful tool to increase unemployment among teenagers and minorities, and especially teen minorities. Don’t take my word for it. Look at the amount of research on the subject (see http://bit.ly/8FJcb5 ). 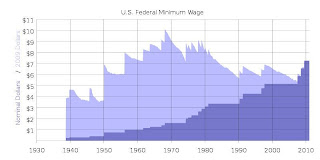 1959
Bauer, P.T. 1959. Regulated Wages in Under-developed Countries. In The Public Stake in Union Power, ed. Philip D. Bradley. Charlottesville, VA: University of Virginia Press, 324-349.
Argues that the negative effects of minimum wage laws in LDCs is even greater than in industrialized countries, because there is greater diversity of supply and demand for labor in LDCs. Also points out that in South Africa minimum wages helped whites at the expense of blacks.

1980
Iden, George. 1980. The Labor Force Experience of Black Youth: A Review. Monthly Labor Review, vol. 103 (August): 10-16.
Concedes that the minimum wage has had a significant negative effect on teenage employment, especially for blacks.

Phillips, Llad. 1981. Some Aspects of the Social Pathological Behavior Effects of Unemployment among Young People. In Rottenberg (1981a): 174-190.
Finds that primary impact of minimum wage is on young males, especially black males. This has encouraged continued school enrollment and entry into the armed forces. However, it has also encouraged "illegitimate" alternatives to employment, such as crime.

1982
Linneman, Peter. 1982. The Economic Impacts of Minimum Wage Laws: A New Look at an Old Question. Journal of Political Economy, vol. 90 (June): 443-469.
Finds that the disemployment effects of the minimum wage fall mainly on blacks, females, restricted individuals, residents of small cities, those with low education, the old, and non-union members. Beneficiaries of the minimum wage mainly are males and union members.

Meyer, Robert H., and Wise, David A. 1983a. The Effects of the Minimum Wage on the Employment and Earnings of Youth. Journal of Labor Economics, vol. 1 (January): 66-100.
Estimates that abolition of the minimum wage would have led to significantly higher employment among youth, especially black youth. Finds no evidence of higher earnings from the minimum wage.

2000
Burkhauser, Richard V., Kenneth A. Couch, and David C. Wittenburg. 2000. “Who Minimum Wage Increases Bite: An Analysis Using Monthly Data from the SIPP and the CPS.” Southern Economic Journal. Vol. 67, No. 1 (January), pp. 16-40.
Minimum wage increases significantly reduce the employment of the most vulnerable groups in the working-age population--young adults without a high school degree (aged 20-24), young black adults and teenagers (aged 16-24), and teenagers (aged 16-19). While we also find that minimum wage increases significantly reduce the overall employment of young adults and teenagers, these more vulnerable subpopulations are even more adversely affected.

It doesn’t end. In fact it only get’s worse. Those most affected by the current recession has been black teens. Teens in general have a lower employment rate, but the unemployment rate among black teens is harmful to the fabric of the United States. Teen employment is important because it provides important skills and work history needed for later employment. You have to ask yourself, who is on their side and why do we allow minimum wage laws to harm those most in need? Dirk Van Dijk, CFA via Zacks recently commented on the tragedy.


Why has the African-American community so heartily accepted the Democrats agenda which has the effect of pushing their young people into unemployment and even crime? I think it was partly the Republicans acceptance of the Dixiecrats who broke off from the Democrats in the sixties is the obvious answer. However, that was years ago and there were more Republicans who signed the Civil Rights legislation than Democrats. A better answer would be the democratic coalition would be dissolved and the self-annointed African American elite would lose their status and power.  That and plus the fact that there are a lot of ideas that sound great on paper that end up doing more harm than good.