More than one in 20 US households will lose their homes 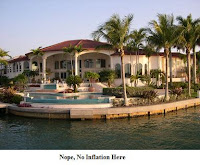 Henry Blodgett reports a much-cited study this week arguing that the country has a huge "shadow" inventory of homes that will be hitting the market over the next few years (See http://bit.ly/dudD40). .


"Another startling assumption here: 80% of homeowners who are currently delinquent on their mortgages will end up losing their houses. Mortgage mods, meanwhile, will just delay the inevitable.   ...Of the 7.7 million delinquent homeowners, we actually think that only about 1.6 million will be able avoid losing their homes, and that the remaining 6.1 million will lose their homes."

"...we don’t believe modification efforts will truly save a lot of homeowners from losing their homes, we do believe that these programs are effective in delaying foreclosures and pushing out the additional supply to later years".

So essentially instead of taking the supply spike now, they will take them in the future.  Isn't that just delaying the inevitable?  So what they are saying is that housing is not a good investment now and won't be for several years.


"...if the economy takes another dip and mortgage rates spike, we’re certain to see another decline in prices."

If inflation leads to increased interest rates, as we have been preaching here, it is a certainty.
Housing Interest Rates