Buggy Whip: US Taxpayers Give GMAC a $17.3BB Neg-Am Loan 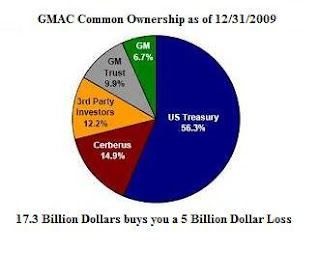 GMAC  just posted its 4th Quarter Earnings and I thought it would be interesting to see just what we get for our 17.3 Billion dollar investment by the US Treasury into an auto and mortgage finance company.   It is unusually ugly, and for a company that has consistently dissappointed like GMAC, it is noteworthy.  In the interest of full disclosure I used to work for GMAC, so....

As we dissect the financial statements, there are certain facts that will make you wonder why we ever gave our money to them in the first place.  Then I will show you that there is no way that the US taxpayer ever going to recoup their $17.3 Billion bailout.

Some Tidbits from their financial statements (See also http://bit.ly/9aadJF).

Where did the Missing Billion Dollars Go?

Pretax Loss of $4.0 Billion driven from $2.6 Billion of Marks of assets being sold that were originally included as Held For Investment, that had to be marked to market, and another $573 Million for repurchase reserves expense for loans that they may have to buyback due to fraud or misrepresentation.    The big question for me is that there close to $1 Billion that has not been fully accounted for.  It is classified as losses from continuing operations, but does that mean that they will continue to make these losses?

Originally, GMAC was given taxpayer money for one reason only.  It was deemed too important to fail due to the fact that they were required in order for General Motors to remain a viable company.  necessary to fund automobiles in both the retail and wholesale markets.  They fund retail loans to consumers for autos, and fund dealerships inventory and make other commercial loans for dealerships to succeed.

The argument was that GMAC declaring bankruptcy might lead to General Motors declaring bankrupcy as people would not be able to finance GM cars.  Well that happenned anyway.  General Motors did declare bankruptcy and in 2008, GMAC stopped doing leasing anyway.  Their better capitalized competitors were doing all kinds of financing, including leases (Nissan, Toyota, BMW, etc.).  Behind the scenes, when GMAC was having financial difficulty, TD Bank had already approached many of the GM dealerships in Canada.  Now, instead of being the Dealerships captive outlet, GMAC has to fight to get those loans.   Let me state that another way, GMAC is no longer a captive financier for GM.  If they would have failed, other banks would have stepped in to take their place.  This is all public information.

GMAC also finances dealer inventory and dealer commercial loans as its captive financier.  The argument goes that if the US Gov't didn't rescue GMAC that they might have had to shut a signficant number of their dealerships due to lack of funds.  Well that happened anyway.  1605 dealerships closed last year (See http://bit.ly/d1l3Cd and http://bit.ly/bk3WTl).  That is the largest number of shutdowns per year since they started counting and doubled the previous years closures.

The other argument made was that if some of these strategically important players went under, we might see higher unemployment, possibly 8%.  Well that happened anyway.   The point is that the Federal Government with their bailout money cannot stop bad things from happening.  Their bailout did not stop the 139 bank failures in 2009 (See FDIC).  We are on a pace of approximately one failure every two days for 2010.  For the record, Hank Paulson lurked behind the scenes scaring folks with Al Gore zeal suggesting 25% unemployment, but I digress.

As we can see, the bad things that they said were going to happen to us if these banks failed all happened anyway.  Not even the jobs were rescued.  Detroit's has over 15% unemployment rate.  GMAC is not holding back laying people off just because they have Taxpayers $ 17.3 Billion, via Business Week


GMAC will cut about 554 jobs, including 313 positions at ResCap’s offices in Charlotte, North Carolina and Costa Mesa, California, GMAC spokeswoman Gina Proia said yesterday. The Semperian auto-loan servicing offices in Charlotte and Knoxville, Tennessee, will also close, cutting 241 jobs, she said. The reductions “are part of getting our structural costs in line with business activities,”

The US Treasury supports GMAC because it is strategic to financing of auto loans.  But we are really just covering losses on mortgages, so GMAC can have the capital to lend to the auto side.  Interestingly enough, they haven't exited the origination business.  In fact their position as a primary originator has gotten stronger in the last year.  Let me restate that  GMAC is originating more mortgages in 2009 than in 2008 (See http://bit.ly/9aadJF).  They also have a bank, Ally bank which has an abnormally low cost of funds due to Treasury support.  In fact, strategy meeting at GMAC have made it apparent that Auto Loans are only going to be one of their business, credit cards and retail (branch) banking are the others.   We bailed out a auto bank that became a retail bank, because they no longer were crucial to the success of the US auto industry.  Tell me how it makes sense that the Feds are picking winners in the marketplace... and they haven't even picked the fastest horse.

Our very own Negative Amortising Arm

GMAC owes $17.3 Billion.  Last Quarter they lost $5 Billion.  Making the unrealistic assumption that they will never lose another penny from "continuing operations" on the mortgage side (Rescap still owns $19 Billion in mortgages and could still see another $5 Billion in losses before through).  They made $1.99 Billion in Net Income from non-mortgage operations over the last 4 quarters.  Assuming every penny of Net Income goes to the US Treasury,  with an 8% cost of funds, they won't be able to pay this off for 16 years.  If the Treasury sinks another $2.3 Billion which is likely, it will be over 22 years.  Note that these Net Income numbers are likely too rosy for ongoing operations.  If Net Income were to drop on average below $1.6 Billion, then the US Taxpayer would never get paid off.     It would become a Negative Amortizing Arm, getting more and more in dept until it implodes or explodes or the US Taxpayer forgive the debt, i.e. don't get paid.  Can you say "Neg-Am Arm".
Bailout GMAC