Europe's Soft Underbelly: How Debt Could Send OECD Economies into a Tailspin

By EconomyPolitics - February 08, 2010
Debt is catching up the OECD countries in a big way.  The US is not immune.  The Stimulus added 800 billion to the public US debt figures (See http://bit.ly/bvi6oV).  The US Federal Reserve has added 1.37 trillion to the Money Supply over the past 2 years (See http://bit.ly/bmBwxn). This unprecendented increase in publicly owned debt does little to help the US in the long run.  Even in the short run, the benefits are tenuous at best.

In Europe, several of the countries have gone through greater crisis than they have in the US.  Iceland had a bank implosion.  Greece is having public unrest.  As soon as it warms up a bit, we could very well have a summer of discontent on our hands.  Spain, Italy and Portugual are next on the highly-indebted, socially-discontented places to be (See http://bit.ly/c63Ve1).  We might agree with the White House in thinking that we have the worst of the crisis in the rear view mirror, but the credit markets don't look like they agree.  Listen to what the markets are telling us about the long-term attractiveness of massive spening increases.  From the Globe and Mail.


The debt threat stalking some of Europe's weaker economies, the tumbling euro, the United States' eye-popping deficit and its still-deteriorating job market are all powerful reminders that the deep-rooted fiscal problems that pushed the global financial system to the brink continue to pose serious risks to stability.  The latest flashpoint is Portugal, where the country's parliament defeated an austerity plan Friday.

It is important to think about why the credit market (and subsequent stockmarkets), went into a tizzy.  Prices for default protection spiked because the parliament defeated a bill that would enforce fiscal discipline on government expenditures.  Just about every country in the EU has had their own stimulus bill similar to the US, which has placed future taxpayer money on the line to pay for dramatically increased spending projects. 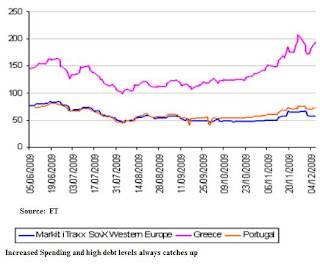 The interesting thing about the whole equation is that the debt levels are not too much higher than where the US debt levels lie.  Sure the most indebted, i.e. weaker economies are feeling the pain first, but they will not be the last.  The debt levels all over the rich world could become an area of concern, especially in the US, UK, Italy and Japan, which has the mother of all stimulus hangovers (See http://bit.ly/cnkw7F).
The United States should think of think of this as a wakeup call.  Indeed, Geitner has been getting peppered as of late about the staggering levels of US debt.  In spite of Geitner's confidence that the US will "never" lose its AAA debt rating (See http://bit.ly/9AoYU8), it is really just simple algebra that tells you that it is possible.  Geitners explanation below via Bloomberg:


The U.S. plans to rein in the deficit once the labor market recovers, Geithner said. In the short run, that means focusing on ways to “make sure that this economy is growing again,” he said. The administration says the deficit will shrink over the next four years as more Americans find jobs and the economy accelerates.

Unfortunately, Moody's does not agree, again via Bloomberg:

Moody’s Investors Service Inc. last week said the U.S. government’s bond rating will come under pressure in the future unless additional measures are taken to reduce budget deficits projected for the next decade.

The real problem with Geitner's Keynsian argument is that the Stimulus is the problem that is depressing sovereign credit markets (e.g. Portugal) and he is marketing the Stimulus as the solution.  We can see from Portugal the effect of lack of fiscal discipline.  Even in a crisis, it is important to have one's house in order.  In fact, in all the OECD, there is just one player who has not gone down the Keynsian street.  Meet Mr. Market.