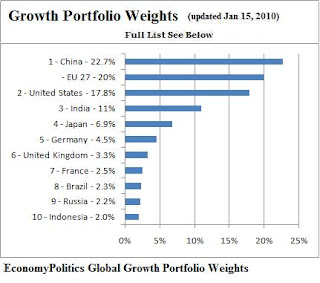 The idea of Index of Incremental GDP is an extension of the previous lists. The previous two indexes have have measured economic efficiency (see http://bit.ly/7gYg4d) and GDP growth rates (See http://bit.ly/6qzws4). Both are inputs into the Incremental GDP measurement. For the wise investor seeking to capture economic growth, the major inputs are included. I have included portfolio percentages as to where you should be investing to capture that growth and build a globally diversified investment portfolio.

Looking at the list, one thing stands out. Incremental GDP is coming from both the developed world and emerging markets. China stands out as the best place to capture GDP growth because demographically, it has a lot to offer, but also because the Communist China is making investments into infrastructure and increasing economic freedom. I have outlined the basics of my methodology below.

A more populous country, with similar economic freedom will have advantages of size and scale. Greater working population translates into greater economic activity given a similar GDP per capita. Furthermore, more populous countries have a larger internal market for their goods and services. For example, India may not have a lot of Free Trade Agreements with other countries, however their internal free trade area encompasses 17% of the world’s population, more than double the size of the European Union common market. The United States currently has free trade agreements with 17 countries, but this common market is less than half the size of the internal Chinese market.

In fact, if you eyeball the countries, going down the list, it is obvious that there is a clear preference for large countries, with their inherent network effect. Note that investment bankers understood this point when they coined the BRIC (Brazil, Russia, India, China). These countries are simply the most populous developing countries, with the exception of Indonesia. South Korea, Japan, Chile, Hong Kong and Thailand were not included in BRIC because they were either too small or too developed or both.

The rankings uses a long term GDP outlook called Latent GDP, which looks at long term growth potential for 116 countries. Using the United States as an anchor, we looked at future GDP Per Capita of the United States, using a 2.23% real growth rate for 40 years. In that timeframe, any country that practices sensible policies of economic liberalization should be able catch up in terms of GDP Per capita. In capturing GDP per capita, we used Purchasing Power Parity (PPP) to as long term, things drift toward PPP.

At the same time, high GDP leads to a higher incremental GDP with a similar growth rates. The reason is simple: the base is higher. For Example, if you have 3% growth on a very high GDP number, the incremental GDP will be higher. Africa might have higher GDP growth rates, but their GDP numbers are inconsequential compared to the United States. For a wise investor seeking growth, they should seek incremental economic activity, or as we call it Incremental GDP. That can come from high GDP countries with a much larger base, but lower growth, just as it can come from the emerging markets with a healthy catch-up factor.

Economic Efficiency encompasses economic freedom, infrastructure, monetary policy, property rights and fiscal policy. A country that has these characteristics will naturally be in a greater position to capture growth than one that is less efficient. This becomes an input into economic growth rates which in turn affects incremental GDP.

How to structure a portfolio to capture growth

Since growth is the ultimate driver of long-term portfolio returns, ultimately we should seek growth, as measured by incremental GDP. The most compelling incremental GDP stories come from poor countries with high economic efficiency and large populations. Tailor your portfolio to capture this incremental GDP. Likewise, a rich country with low populations and little economic freedom have little to offer investors.

Feel free to use but must source back to EconomyPolitics. 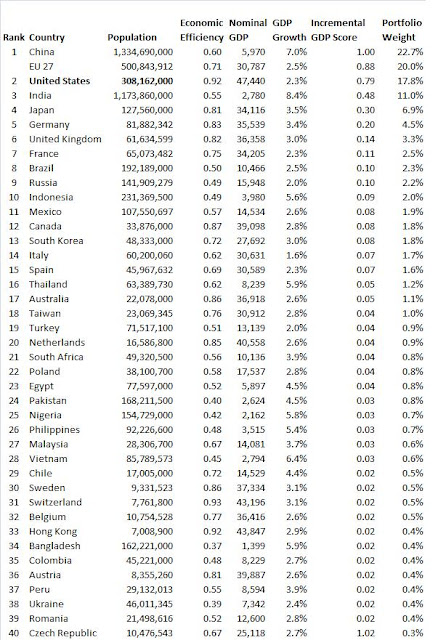