First, do no Harm: Why we need the Government to end the BCS Monopoly 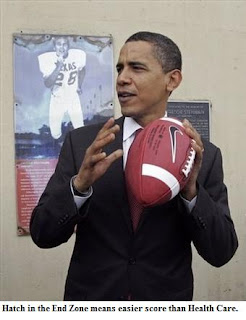 With so much at stake in our country's future, Barack Obama is venturing off his health care defeats and has set his site on reforming the College Football.  I know many of us who are fans of sports think that we should keep politics out of College Football.  You might think that it is one more idea of imperial overstretch.  Just wait until they get a football czar.

Those ideas are legitimate, but let's think about the other things that the President and White House could be doing.

No Football Team Left Behind

To give you some context, this was instigated by Orrin Hatch, whose homestate of Utah seems to get the short stick of the College Football Championchip.  Last year the Utah Utes were the only undefeated college football team, but they still were not able to walk home with the #1 trophy (See http://bit.ly/dAzENW).  His Alma Mater BYU has also been in consideration a number of times by the polls for a position at the BCS championchip table, but has been deep6-ed by the BCS heirarchy.   Senator Hatch has an axe to grind and is claiming that the BCS system of picking national championchips shortchanges the Mountain West conference and is a monopoly.  He is recommending that Obama use Anti-Trust laws to force a change to a playoff system with the top eight ranked teams competing (See http://bit.ly/a4Hr7t).

I did attend BYU so you might think that it is convenient that I suport the President in this endeavor.  However, my desire to see the BCS system changed is based solely upon my idea of the proper role of government.  A couple of years back when the US was parading Major League Baseball players to testify for steroid us in front of Congress, I gave my full support for the same reason.

A Case for Action

Don't get me wrong.  I don't actually want the White House and Congress getting involved in things that should be left entirely to the private sector.  However, I am a realist.  I know that government will always be busy trying to save people from real or imagined evils in this world.  Following the investment mantra:"First do no harm".  I would rather have Congressional Manpower and Whitehouse bureacrats spend their time and political capital doing things that will not reverberate across the economy and do not have an aspect into our everyday lives (apologies to sports fans and players).

Therefore, I would like to propose that Congress and the Whitehouse act.  Please urge your congressional representatives to act and send a letter to the white house.  We must destroy this evil monopoly before it destroys college football and sinks sports fans into a depression, which would stimulate alcohol consumption, and beer-soaked beating rages.  In fact, they need to hold congresional hearings, they need to do in depth studies, they need the anti-trust board to investigate.  After all, we don't really want them spending their time working on heath care, bailouts and tax increases.