Impossible: You can't cure our debt through inflation 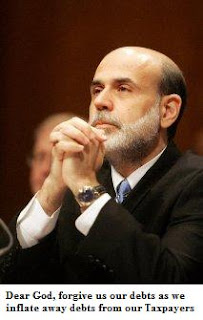 Maybe they weren't listening.  We reported on this a week ago. We can't inflate away our debt and 2+2 will never equal 3. It is impossible to inflate away our debt as a recent Washington Times article has suggested.  The numbers don't add up.  But the media just accepts that it will happen without actually doing the numbers (See http://bit.ly/coVNZW).


"...fears are growing that the United States will once again resort to printing money and ginning up inflation to resolve its debt problem.  ...history suggests that this is the way Washington will go to avoid the political pain of having to raise taxes and cut spending on popular programs such as Social Security, defense and Medicare."

"Some notable economists argue that such a move would avert a debt crisis like the one confronting Greece and other European countries that have been unable to reduce spending because of strong public resistance."

Some economists say that we could avoid a debt crisis with inflation.  Which ones?  All the economists that I have heard about oppose inflation as a way to get out of debt.  Not only does it set a bad precedent, but it is impossible.  We reporeted on why it is impossible by going straight to the source (See http://bit.ly/baWWEs).  We went to the Fed's own balance sheet and got the maturity for their existing debt.  I have summarized it below.

That means that we could only inflate away a portion of 35% of our debt, and pay higer penalty rates for the remaining 65% which has to be refinanced.  Hmm.... that doesn't seem like a  winner strategy.  But just for grins lets do a small loan modification to simulate this effect.

Take a 100,000$ mortgage, and split it up between the long-term financing and short term financing, with 65% being short term and 35% being long term.  Say the current rate on the mortgage is 4%, which is a proxy for what the government pays on long term bonds. Now inflation has increased from 2% to 4% which increases the interest rate by the same amount and also reduces the market value of the 35% that we are financing long term.  We get debt forgiveness, which essentially reduces the principal by 10,000$.  Cool huh?  Now we only owe 90,000$ vs 100,000$ before.  Not so fast.  The rates that we are paying on the 65,000$ have gone through the roof leaving interest servicing expense higher. 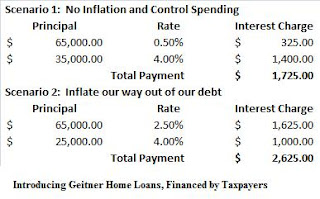 As we see, interest payments have increased dramatically.  It is impossible to inflate away our debt.  In fact, debt tends to increase with inflation (See http://bit.ly/baWWEs).  Nice try though.  Too bad anyone with a spreadsheet who knows the refinancing dates for debt rollover can refute that intellectually lazy argument in just a few clicks.
Federal Reserve Inflation