Inflation Down?: Think Again, Inflation is up

By EconomyPolitics - February 22, 2010
Core CPI inflation was recently reported at 1.6% Year over Year, compared to 1.7% in January 2009. Even the Federal Reserve and the WSJ have reported how fortunate we are to have stable inflation. Don't believe it. It is down in its entirety almost wholly because there was a decrease in "Owners Equivalent Rent".  In case you wonder what that is the definition is listed below.

Owner's Equivalent Rent:  (via Investopedia): The amount of rent that could be paid to substitute a currently owned house for an equivalent rental property. Owners' equivalent rent is obtained by directly asking sampled homeowners the following question: "If someone were to rent your home today, how much do you think it would rent for monthly, unfurnished and without utilities?  This number goes into the CPI and is used to calculate home price inflation and consitute 32.5% of the 'core' CPI.  Actual rents are 7.5%.

Stefan Karlsson, a Swedish economist has reported via Christian Science Monitor that inflation was much higher (See http://bit.ly/aBxB68).

And just for reference Owner Equivalent Rent is a bogus number.  During the housing bubble, it remained flat while the housing in California and Florida doubled in value. Why?  Because rents did not go up with the corresponding increase in housing.   The Fed blew it.  Inflation was almost 8% in 2006 and the Fed was touting no inflation.  When people's largest expenditure in their lives doubles, no inflation.  When the prices of bacon rises 10 cents, that's inflation.  (See http://bit.ly/cjas4C).  I should be working at the Fed. 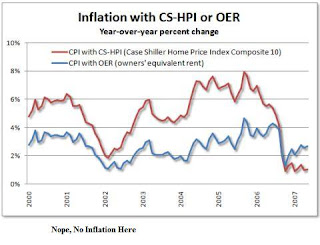