Inflation is More Difficult on Businesses than you might think

By EconomyPolitics - February 08, 2010
Research from McKinsey on the effect of inflation on businesses (See http://bit.ly/cfTBNs).  Businesses that operate in an inflationary market don't just have to grow earnings at the inflation rate.  They have to beat it.

...a closer analysis reveals that to fend off inflation’s value-destroying effects, earnings must grow much faster than inflation—a target that companies typically don’t hit, as history shows. In the mid-1970s to the 1980s, for instance, US companies managed to increase their earnings per share at a rate roughly equal to that of inflation, around 10 percent. But to preserve shareholder value, our analysis finds, they would actually have had to increase their earnings growth by around 20 percent. This shortfall was one of the main reasons for poor stock market returns in those years.


...it can push up the cost of capital in real terms and lead to losses on net asset positions that are fixed in nominal terms.


...inflation’s biggest threat to shareholder value lies in the inability of most companies to pass on cost increases to their customers fully without losing sales volumes. When they don’t pass on all of their rising costs, they fail to maintain their cash flows in real terms.

So when inflationary fiscal and monetary policies lead to rising CPI numbers.  Businesses have to work twice as hard as they normally would, just to keep up.   See graph from McKinsey below: 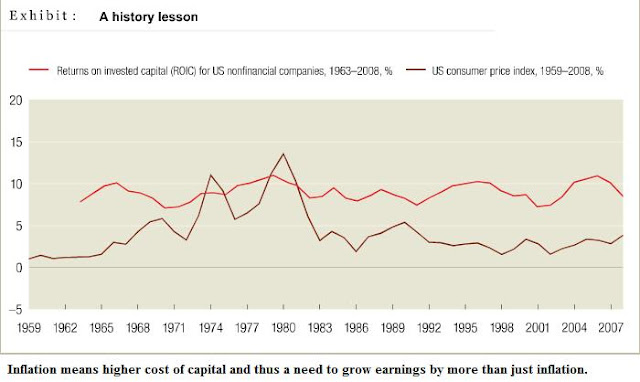