Inflation is Rising: You Heard it Here First 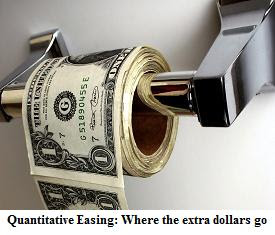 At EconomyPolitics, we have been preaching against the inflationary monetary expansion that is currently happening right now. We are curing a credit bubble with inflation. There have been some recent stories about inflation in the news, but just so you don't think that we are conveniently jumping on the bandwagon just as it is taking off, we have published 8 posts in the past 3 months about inflation. You can see them in all their glory below:

Some interesting things are happening with inflation right now:


1)  It is increasing in Britain (See http://bit.ly/9YgJso). It has jumped to 3.5%, which eerily close to the 4% targets that Paul Krugman and the IMF have recommended.
2)  It is increasing in the United States (See http://bit.ly/dnqViy). Food and Energy have led to a 1.4% increase in the PPI. Annualized that is almost 17% increase. I don’t expect that spike to be sustained, but it isn’t heading in the right direction.
3)  The Fed just raised it's emergency rate from .50% to .75%.  That window is not being used anymore, so the gesture is largely simbolic.

4)  Core CPI actually declined (See http://bit.ly/dfDYKP).  This will not continue.  Too many signs are pointing in the opposite direction.
The Fed is Clueless about the dangers of debt and  inflation


There is only one dissenter on the Federal Reserve Board that has raised concerns about inflation and debt. The US is not immune to debt concerns as default insurance spreads are widening on all debt even US Gov't debt. That dissenter is Thomas Hoenig (See http://bit.ly/coVNZW). If inflation does sting America, Ben Bernanke is going to look as incompetent as Bush did during Katrina meetings. Hoening argues,


…"short-term political pressures" are prompting Congress to take a risky gamble by continuing to borrow at unsustainable rates rather than address the deficit problem and he expects political leaders to be "knocking at the Fed's door" to demand that it print money to pay for the debt.

This path "inevitably leads to financial crisis," Mr. Hoenig said, while the inflation it would spawn would threaten American living standards and destroy the independence and credibility of the Fed, whose most important job is to prevent inflation.

Remember, the governors that make up the Federal Reserve are not about to give up Fed Independence, however, they are no free marketeers either.  Alan Blinder, was on the Federal Reserve Board of New York, and once he left he carried Al Gore's and John Kerry's water and basically authoured the tax on poor, sick and homeless known as Cash for Clunkers (see http://bit.ly/9kcT9B).
Federal Reserve Inflation