IMF to US: Double your inflation rate

By EconomyPolitics - February 15, 2010
Paul Krugman, a liberal nobel laureate economist, who recently has been arguing that we should be spending more money.  Usually he is off his illiberal rocker, and is the only one making these arguments.  The scary thing about the current situation is that other well respected economists are making insane arguments.  The current insane argument is concerning inflation (See http://nyti.ms/dkh4SF).


"Olivier Blanchard... currently the chief economist at the IMF, has released an interesting and important paper on how the crisis has changed, or should have changed, how we think about macroeconomic policy. The most surprising conclusion, presumably, is the idea that central banks have been setting their inflation targets too low."

He makes the case that Bernanke would not agree.  However, if respected economists who forever, have been making arguments against inflation, are arguing for increasing inflation, it weakens the resistance of those at the Federal Reserve who do not think it wise to prime the pump through inflation.

Although the Fed doesn't publish inflation targets like the US Federal Reserve does however, the general consensus both in the US and Europe is around 2% inflation rate is desireable.  Blanchard has recommended doubling that target to 4%.  Yes, I said that they are open to an inflation rate target of 4%.  Yes, the Chief economist of the IMF is suggesting a doubling of inflation (See http://bit.ly/c02Jwj page 11) 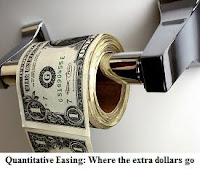 To me, it is clear what is happening.  The case is being made for greater inflation.  Don't get me wrong;  inflation will not allow us to inflate away our current fiscal mess (see http://bit.ly/baWWEs), but it would allow home prices to devaluate in real term, staying flat on nominal terms without going through more big complicated homeowner bailots and loan modifications.
Federal Reserve Inflation