By EconomyPolitics - February 11, 2010
One fallacy that is often presented that is blatantly false is that inflation will help the US escape their debt liabilities as we inflate away our liabilities.  That is a strategy which is often presented as a solution to our current fiscal mess.  I do not think that is the White House strategy, and if it is we might as well move to Argentina.

Don't get me wrong, long term liabilities holders do benefit from inflation.  The probelm is the duration of the US Treasury debt is not mostly long term.  Think of it as you would your mortgage.  The burden of the payments on a thirty-year fixed mortgage would be less if the interest rate environment went from 4% to 15% due to increased inflation.  However, if you had a three year arm and knew that the remaining balance would be financed at the higher rate, you likely would not be too enthusiastic about inflation, especially when you see what happens to your home values (See http://bit.ly/6auKvD).

That is the kind of the financing that the government has right now (See http://bit.ly/b8WdZk page 9).  From the governments own pen, here are some sobering statistics.
That debt will have to be either be refinanced at the prevailing market rate, which will take into effect the current and future expectations of inflation, or it will rise concurrently with inflation.  If there is an increase in inflation in the next 12 months, the US Treasury would pay higher borrowing costs to refinance — thus negating any real reduction in long-term borrowing costs.  Thus the national debt does not undergo any real reduction due to inflation.

Paul Donavan, a UBS economist explained this fallacy as Tracy Alloway takes a good hatchet job to that argument in her Alphaville blog (See http://bit.ly/9erPL6).


"The problem with the idea of governments inflating their way out of a debt burden is that it does not work. Absent episodes of hyper-inflation, it is a strategy that has never worked. Government debt: GDP burdens tend to be positively correlated with inflation. ...OECD government debt rises as inflation rises. Meaningful reductions in government debt will require a low inflation future." 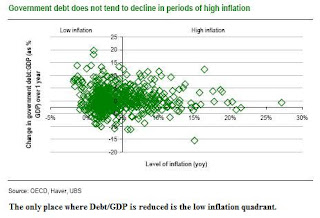 The point then, is that there aren’t many instances in the lower right-hand quadrant, which would coincide with relatively high levels of inflation and a decline in government debt as a proportion of GDP.

The idea that governments can readily inflate their way out of their debt problems is a misnomer — arising, perhaps, from confusion between the fate of the individual bondholder and the response of the collective market. An individual holder of a long duration bond will lose out as a result of inflation. However, modern governments can not rely on markets to remain collectively indifferent to inflation. Inflation will raise the nominal cost of borrowing (of course) but through the inflation uncertainty risk premium it will also add to the real cost of borrowing.

The higher debt service cost becomes a problem for a government that is pursuing an inflation strategy because government debt does have to be rolled over. Unless a government is willing to pursue hyper-inflation as a strategy, raising inflation will not reduce the government debt burden. Indeed, history indicates that the reverse result will be achieved.

Su unless we go all they way to hyperinflation a la Zimbabwe or Venezuela, inflation will not have any fiscal benefit.  Let's hope that our unelected folks in the current administration are smarter with inflation policy as they are with fiscal policy.  I may have spoken too soon.
Debt Inflation