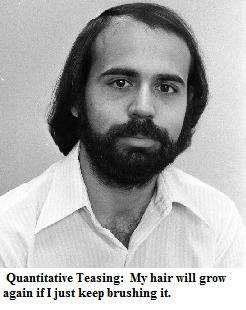 Nassim Taleb, who wrote, The Black Swan, which examines the influence of highly-improbable, but massive impact events, recently spoke about problems he sees with the Fed Chief Ben Bernanke (See http://bit.ly/a0KvCO).

He spoke about six problems with Bernanke.  If true, they are serious and damning.
One of the vanities of modern Keynsian economics the idea that a do-good regulating bureaucrat can understand the intricate and complex financial system better than the thousands of market participants who still often get things wrong.

The Collective Wisdom of the Many

Take General Electric, who knows the most institutional knowledge about running this company?  Odds are you might say the CEO, or COO, and you might be right.  But, in all their wisdom and knowledge, they do not know more sum of the parts, e.g Finance Manager, Marketing Coordinater, the Energy Traders, etc.  The Executives are smart, but odds are even an average Joe could run a well managed company.  Take a look at the top CEO's of all time. Most of them are run by average Joe's (See http://bit.ly/bQYlL4).  One thing you do not see on this list is a bunch of Harvard-educated smart asses, think Jeffery Immelt.

Likewise, who knows more about the value of the company, the CEO or the sum of all the market participants, meaning the analysts, traders, and investors.  The CEO knows a lot, but do they know more about their competitors, new technologies, etc.  Again, look at what Jeffery Immelt has done to the value of General Electric.

One more example, who knows more about the value of the mortgage backed securities currently on the Fed's Balance sheet to the tune of almost $1 trillion (See http://bit.ly/bmBwxn)?  The Fed, or the host of hedge fund managers, mortgage traders, and private investors.  The Fed of course, is one of many people who are betting on mortgages right now so it may be right, but the arrogance that they have to correct the market is disturbing.
Ben Bernanke Federal Reserve