No Inflation Here: Why Inflation is around the corner and why you should sell your home now 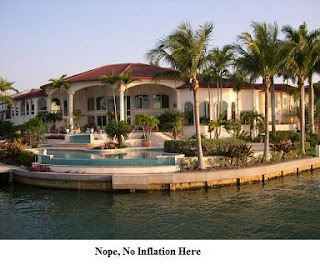 Yesterdays Washington Times contained an article from prominent economist Richard Rahn about inflation.  He was asking the simple question that seems to be puzzling many who claim that the fiscal and monetary pump priming will lead to general price inflation as indicated by an increase in the money supply (See http://bit.ly/aJ4LB4).  As we can see from the Fed's own figures the balance sheet (See http://bit.ly/bmBwxn) and the M2 figures (See http://bit.ly/aw9lhg) have increased.

Rahn stated that inflation happens when the money supply increases faster than the supply of goods and services. While that is true, it does not always show up in the CPI numbers. The simple reason being, when there is excess cash, we can either spend it on consumption, or invest it. When the money flows into the economy via the banking system, if it primarliy goes into consumption prices rise and we see rising CPI numbers. When those with spare cash continue investing, as they did in property and MBS, we see bubbles form. It was always odd to me during the housing bubble, the largest expenditure ever made by most people, i.e. housing, was tripling in some cases, but since bacon prices held steady no inflation.  Hmmm...

Rahn also points out another figure that historically inflation tends to lag monetary expansion by one or two years as money supply increases finally make it into the real economy.  Since the big monetary expansion took place in the last half of 2008, we should see growing inflation by the latter part of this year.  Not good news for housing since housing prices are tied to the nominal interest rate.  EconomyPolitics studied the 70s and 80s and saw real house prices fall when inflation shot up (See http://bit.ly/6auKvD).

Monetary Tricks at the Fed

Rahn explained what the Federal Reserve is doing to hide this fact from the rest of us:


(They) can mask the rise in interest rates for a while, as they are now, by making money available to the banks at very low rates (presently close to zero for short-term borrowing). And individuals and businesses can squirrel away much of the new money by increasing their savings rates. But what happens if people see a rise in inflation and at the same time are unable to obtain sufficiently high interest rates on their savings to cover the inflation and then some? Many increasingly will flee from holding cash balances and just buy "stuff," which can lead to an accelerating rate of inflation or even hyperinflation.


Studies show that once the government ratio of debt to gross domestic product rises above 90 percent, interest rates begin to accelerate to destructive levels. The debt projections by the administration and the Congressional Budget Office show the U.S. getting very close to such a level in the next few years, while more objective private forecasters see the debt-GDP ratio rising to much more than 100 percent.

There are only two ways to get out of this mess.  We have to endure stagflation (where we have increased taxation and high unemployment).  Who likes that solution?  The other way out is to dramtically cut government services.  That will put a few civil servants out of a job, but restore the economy and reduce the risk of inflation.  I'll take the latter, but I bet Congress and the White House will go for the first.
Federal Reserve Inflation