By EconomyPolitics - February 18, 2010
There is a false claim going around the the Stimulus saved us.  I for one think that the current recession is hell and it will only get worse.  To me, it is an argument which can easily be disproven with just a little investigation.  At EconomyPolitics, we hold them to the facts.

Of course, then they throw the red herring of "what if" out there.  You think it's bad now, just imagine how bad it would have been.  Of course, that is an argument that cannot be proven or disproved, because it requires a completely separate reality. I would offer another version of what would have happened if there was no Stimulus.  Less Spending. Less Debt. Less intrusions.

Leave it to Joe

In comes Joe Biden.  He should know that when you have bogus data, you should never give specifics.
He is now out there touting very specific made-up jobs numbers (you would think Obama would educate him on the importance of teleprompters).  They are now claiming to add jobs where none previously existed (See http://bit.ly/aOdWdD).


The claim that stimulus has "created or saved" 2 million jobs is complete fiction. It rests on the obviously false idea that money can be taken from the productive private sector and given to the nonproductive public sector and create a net gain in jobs.


Based on the imaginary existence of a so-called "Keynesian multiplier," this kind of thinking hypothesizes jobs that don't really exist. Sadly, when we count actual jobs, the reality is a bit starker: 8.4 million jobs lost since December 2007, the start of the recession. And more than 4 million lost since the start of 2009.

The recent 5.7% growth has been given as a testament to the fact that the fiscal stimulus is working.  However, the economic indicators all pointed to a recovery before the stimulus was in place.  After the bill was passed, the indicators if anything pointed to the fact that we would have had more robust growth without Stimulus (See http://bit.ly/aOdWdD).


(IBD) pointed to 13 separate economic indicators signaling an imminent economic recovery — with all of them flashing before the stimulus was in place.

Worse is the administration's claim that stimulus is responsible for the fourth quarter's 5.7% spurt in GDP. This, too, is utterly false.  Two-thirds of that number was made up of inventories. Businesses had liquidated so much in inventories as Obama came into office, helping to make GDP declines last year deeper than expected, that when they finally stopped the economy appeared to be growing strongly. It wasn't.

Heritage put out a previous publication on the non-existent growth coming from the fiscal stimulus (See http://bit.ly/65rIHh).

Increased government spending did not improve economic crisis performance. In light of the global financial and economic storm, many advanced economies’ governments have stepped up spending to promote growth and employment. The early evidence is that such spending has not worked. 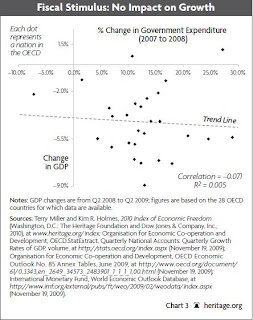