What is inflation?: (Hint: its not CPI)

Inflation (M2 inflation):The technical definition of inflation is a general increase in the money supply.  M2 is the most common measurement for the money supply and includes cash, demand deposits, CDs, and Travelers Cheques.

Inflation (CPI inflation): The vernacular defintion of inflation is a general increase in the price levels as indicated by CPI, PPI, etc.  This really is not inflation, but instead is only an attempt to measure the increase in the money supply through the prices of goods and services.  That is why you will notice in my posts, I usually refer to CPI inflation and try to avoid the term inflation unless I am talking about money supply.

How does the Fed increase the money supply?

The most popular way is to hold the interest rate lower than the Real GDP growth rate.  That injects money into the system via the banks and financial institutions.  As banks can borrow at below market rates, they can earn a spread.  They borrow short term either from the Fed or from depositors (how much interest to you make on your checking account?), and lend at much higher rates longer term.  The monster bank profits get passed to shareholders, employees, investors, etc. and into the real economy.  Much of the profits get placed back into the bank which gets lent out and consequently has a multiplier effect.  Since most bank cash is stored at the Fed, they don't even need to fire up the printing press.  That is why the economy always goes sour when the yield curve inverts.  The banks don't make any money and consequently can't lend.

So what is the right rate to hold the Fed Funds?

As a general guideline, it should be somewhat close to the GDP growth rate.  There actually is a real guideline called the Taylor Rule which models ideal changes to the Federal Reserve Federal Funds rate based upon Real GDP growth and inflation. When money supply is constant, and Real GDP grows, i.e. you produce more stuff.  There is a fixed number of dollars chasing more things.  Prices on a fixed basket of goods fall causing deflation. However, if we expand the money supply at the rate of GDP growth, the price of bacon and spark plugs should remain relatively stable.

So where does the money go once it enters the economy?

The short answer is that it can go two places.  If it primarily goes into the hands of consumers, then it will cause CPI and/or PPI inflation.  If it goes primarily into assets, it will cause asset bubbles. For example, if you received an extra buck from the fed and used it as a down payment for a house.  Or if you were a bank and decided to sink that money into purchasing subprime mortgages. Then you wouldn't see increasing CPI and might be tempted to hold rates artificially low as Alan Greenspan did. 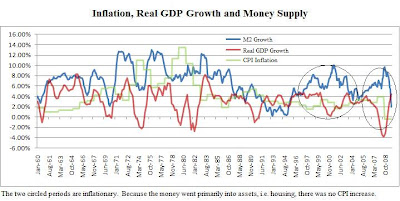 There are only two periods circled that it is not followed by inflation.  One was from 2000, to 2003 when Alan Greenspan kept the monetary policy loose for too long.  That pumped a lot of money into the system with the Fed Funds rate at 1% for an extended period of time even when growth was returning.  The second period starts in 2005, and it is clear what is happening with this money.  It is getting placed into housing and mortgages.

CPI is not inflation

CPI inflation is a very difficult way to measure the increase in prices.  It doesn't and can't capture everything.  For example, it doesn't capture financial assets like stocks or homes or industrial equipment.  Home price increases, during the housing bubble were not captured.  They tried to capture it through an line item which they stick into the CPI basked called "Rent Equivalent Mortgage", but it doesn't work well when the housing prices get disconnected from rent income.  So prices of bacon go up ten cents, it's inflation, but if the prices of most families largest purchase, i.e. house, triple, no inflation.  It boggles the mind.
Federal Reserve GDP Growth Inflation