Cindy Sheehan: Opression has grown much worse under Obama 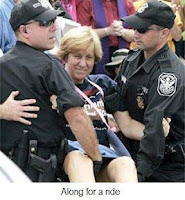 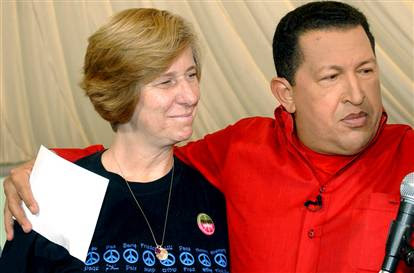 No one listens to Cindy Sheehan in the United States anymore. But Hugo Chavez does. She just finished her evil tyrant tour. She went to Venezuela and interviewed Hugo Chavez and also met Evo Morales.

It was funny that she was the liberal pawn for a while. She really is off her rocker. The left is embarrassed that they once listened to her.

"In many cases, if a soldier gets conscientious objector status they put them on the front lines without weapons. "

On George Bush: "George bush was just a small part of a huge murderous cancerous military industrial system. He is the figure and should be held responsible. Absolutely, he should be put on trial for Crimes Against Humanity."

On Obama: "We’ve lost more jobs, we’ve tripled the troops to Afghanistan. His justice department refuses to hold anyone in the Bush administration accountable. In my experience, the oppression of the police state has grown much worse under Obama. Obama is the same thing as Bush was, a little man involved in this huge cancerous murderous system. He is just a kinder gentler more palatable face."

On Hugo Chavez: "He has been very courageous. I think that something you need a strong charismatic leader for, is empowering the people."

I just can't wait until she goes to Zimbabwe or North Korea. The whole interview is here in Spanish with translation, it is long but for those with patience, enjoy (See http://bit.ly/9teuFa).