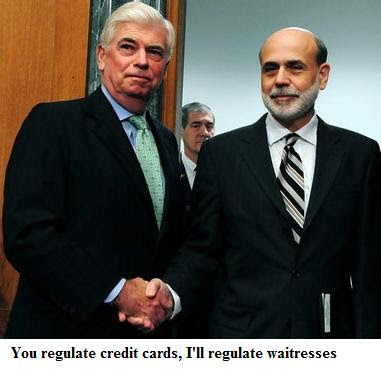 The bill has come out detailing the new propsed relationship of the Fed with the economy.
For those who think that the Fed has too much power already.  Dodd wants to give it more.  Dodd would increase the power of the Fed in the following ways (See http://bit.ly/bb7D3J):
This really is a tragedy. This is he Fed already has tremendous power to give print or choke money by forcing short term interest rates artificially high or low.  Now, the Fed is going to peek at our mortgages.

Don't get me wrong, I don't blame Ben Bernanke.  He is probably as well informed an individual as there is on the economy.  The problem is the system places more control and trust in one man (Bernanke), or one institution (The Fed) than the millions of individuals that make up the market.

The ultimate conceit is to imagine that one institution, the Federal Reserve, would be smarter than the entire market, especially given that the Fed failed to spot the housing, and credit bubble in the first place.  See the video of the most informed man in the world getting schooled by the millions that makeup the market.