Dodd's Dudd will raise interest rates on mortgages by 3% 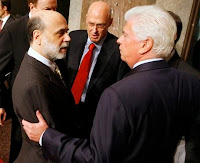 The Dodd bill is an attempt by Congress to stop the next subprime crisis.  However, as usual, their prescriptions do more harm than good and meddle in the financial markets.  Especially damaging is a requirement of financial institutions that sell their mortgages to retain a residual of the payments to make sure that the incentives of the buyer and seller are both aligned.

There are a couple of reasons why this is unncecessary, and even harmful.  Most companies that securitize (or aggregate) mortgages buy those mortgages from a multiple originators.  These originators underwrite loans according to the guidelines of the aggregator.  The loans that fall outside of the aggregator's guidelines either are bought at significant discount (scratch and dent) or they get placed on the originator's balance sheet.  In either case, capacity to lend has been reduced and equity capital falls.

Both possibilities cause financial distress to the originator so there already is a strong financial incentive to underwrite stricly per the aggregator's standards.  If there were problems with bad loans, the best place to look is at the aggregator level.  Originators typically do not have the operational capacity to act as risk managers.

Dodd's bill will require all originators to retain a 5% slice of the mortgages on their balance sheet.  These residuals have the net effect of reducing the capacity of the originator to underwrite loans.  That will take capacity to lend out of the system, just when we need it the most.

Garp estimated that the net effect of this reduction in lending will lead to reduced demand for mortgages and increase the interest rates by 300 bps or 3%.  That means if you have a 5% mortgage, the new rate would be 8%.  That will also have the effect of reducing home prices even further.  We have said here many times that housing's drop is nowhere near finished in spite of the mixed news as of late.

See an 11 page summary of entire bill sent from a source on the Hill.
See GARP's Analysis:


Most senators and congressmen support risk retention as a way to prevent another subprime meltdown. It forces lenders and securitizers to have "skin the game" so they won't make loans that homebuyers can't afford. Dodd also is under pressure from the Treasury Department to impose a strong risk retention requirement on MBS.

If the Dodd bill is passed in its current form, "there will be no new securities," he warned.