Freedom Profiles: Canada beats US when it really counts

Congratulations to Team Canada for taking the hockey gold from the United States in the Olympics. Getting the silver sucks. No one talks about the first game Team USA beat Canada 5-3. No one will remember the last minute score by Zach Parise put us into sudden death overtime. To the victors go the spoils.


There is another healthy competition in which the United States and Canada are engaged: the competition for talent and capital formation. The winner is the team that allows the greatest degree of economic freedom and rule of law. Unfortunately, Team USA is trailing Team Canada where it counts.
I recently spoke with a prominent investment banker in Toronto about the changes happening in the US. “That’s not the USA that I know”, he said as he expressed shock on two overriding themes: the bailout of the auto and financial sectors and the salary caps on executives who took Tarp money (the pay czar has even claimed authority over non-Tarp companies). He also expressed optimism for good times in Toronto if the US continues as corporations flee taxes and regulations to the shores of Lake Ontario.
There are many reasons to believe that he is right.
Think Tanks Agree, Canada Takes Gold

The US has always been way ahead of Canada in terms of economic freedom and lassiez-faire economics, as measured by independent think tanks. Health care aside, the US has been giving up it’s freedom gold and Canada is set to reclaim it. Here is how those two countries compare in terms of freedom:
In both studies, Canada wins.  You can see how Canada has come from behind to beat the USA at its own game: 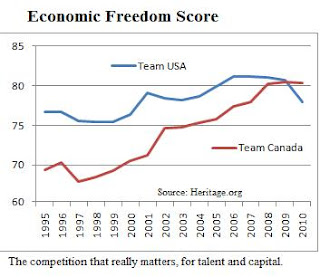 How Canada “gets it right”
Currency Markets Agree

The currency markets seems to echo this sentiment.  Commodities aside, currencies get stronger with economic prospects are monetary prudence. They get weaker, i.e. inflation, with fiscal and monetary mismanagement. The Canadian dollar has been getting dstronger, while the freedom gap vs. the US has been closing. In other words, the currency markets are betting on team Canada. See the long term trend below. 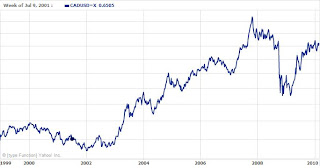