Inflation is really up, not stable

By EconomyPolitics - March 19, 2010
Usually we get things right here.  We often break important news before the mainstream press.  Feb 22nd, we reported one month ago about inflation being up instead of down (See http://bit.ly/cpxaRK).

It took the Economist one month to finally agree with us (See http://bit.ly/9RWxLk). 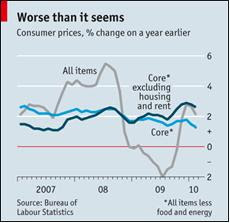 A look beneath the surface, however, complicates the story. Dave Greenlaw of Morgan Stanley notes that one component explains all the decline in core inflation: housing. America’s Bureau of Labour Statistics measures the cost of home ownership by what someone would have to pay in order to rent the house he owns. Falling home prices and high vacancy rates are pushing rents down. Since rent and the estimated equivalent of rent for owners comprise more than 40% of the core index, this has a huge impact on the direction of core inflation. When housing costs are excluded, core inflation has actually risen, to 2.6% in February (see chart). Mr Greenlaw predicts that housing inflation will stop falling, spurring the Fed to raise rates later this year.

As we said earlier, owner equivalent rent makes up 35%, and actual rents 7% of the index.  The owners equivalent rent is a bogus number and should be taken out.  They basically strip out housing prices for inflation and assume everyone rents.  How distorted is that. That is why from 200-2007, the Fed was saying no inflation, but we really had 10% plus inflation due to increases in housing prices.  That is why they are primarily responsible for the housing crisis.  They kept pushing the yield curve low with easy credit when they actually needed a tightening due to housing price inflation.
Federal Reserve Inflation