Logan Darrow Clements on Health Care in Canada, the United States and his upcoming movie

I recently had the opportunity to interview with Logan Darrow Clements. Logan was thrust into the spotlight in 2005 with the decision of Kelo vs. New London travesty. In that decision, the Supreme Court stated that the government could use the Eminent Domain – which normally it could only seize land for the building of a public project – and use it to take private land and give to another private individual or company based upon the tax revenue that it could generate.

Logan attempted to use Eminent Domain to seize Justice Souter’s house in Vermont and put up a hotel, called the Lost Liberty hotel. Most recently, he is the producer of a full-length documentary movie, “Sick and Sicker”, which compares the US health care system with Canada’s and looks for free market solutions to the current health care debate.

See a trailer to the movie below:

To get the full interview, click on the link at the bottom of the page. It lasts for about 30 minutes. Logan is on the money with his take on the current state of the US health care system and even more so with his analysis of the travesty that is Canada’s single payer system. It is my first attempt as this new medium so you have to listen to me sound like a mix of Larry King and NPR. Arrr

Question: What have you discovered about Canada’s health care system since the onset of your movie?:

Answer: I discovered that it is completely politically driven. Decisions are made based on politics rather than what is in the best interest in the patients. Politicians of course ultimately allocate and control the dollars; and what politicians want to do of course in every country is get reelected. So he might do things that are showy like build a new hospital, for example. But new hospitals are not necessarily what Canada needs. They need more doctors. And so politicians want to build a nice new hospital and say to everyone” look what I did” instead of hiring new doctors or do something more important. So the whole decision making process is being perverted.

In addition you have a lot of idiotic decision made by politicians. In the 90s, they had a group of people that got together and said, “How can we reduce health care costs. Costs are out of control. Well, doctors are ordering operations. They are writing prescription which are expensive.  Doctors are putting people into hospitals. Aha lets reduce the numbers of doctors to cut costs”.

They actually paid a half million dollars to retire good doctors and then they put a crimp on people coming out of medical school. Its incredible that they actually manufactured a doctor shortage as a way to control costs.

Answer: A lot of people die of cancer in Canada die because the government simply will not allow them to have certain treatments. My father’s cousin went for cancer treatment in Ontario. He wanted to try a drug that cost 10k dollars. The government of Ontario said “No”. He died. Would he have died otherwise? I‘m not sure, but in the US, if he had health insurance then he would have been able to access the treatment through his health insurance and if his health insurance refused he could have called a lawyer to enforce the contract. There is no contract in Canada.

Now let me ask you, would you rather have a contract with a company or a promise from a politician?

Question: If government control is not the solution, what is?:

Answer: There are a whole host of consumer driven market based solutions. One of the main reasons that the costs have gone through the roof is that people consuming the care are not the ones paying for it. For all the money that is spent on health care, only about 14 cents of every dollar spent coming out of the pocket of people receiving the care on average. So many people are in government programs, such as Medicare. Medicaid, SCHIP etc. and don’t pay a dime. Others have insurance with a very low deductible. So this causes people to not care what the costs are. If people do not care what the costs are the providers can mark up the prices.

There are programs like high deductible insurance combined with Health Savings accounts that allows consumers to direct their health care dollars in a way which makes financial sense to the patient.  That ultimately brings down the costs.  There are a number of other solutions on the website http://www.sickandsickermovie.com/.

Question: How much would it take to get the move up?:

Answer: I would estimate with less than 50K I could finish it up fairly quickly. At this point, I have taken all the footage and I am filling up the holes with animation or voice over. If I had the funds to work with I could get the movie out fairly quickly.

Question: What can the average Joe do help you out in the movie production?

Answer:  If they go to http://www.sickandsickermovie.com/ they will find on there a link where they can donate with a credit card. That money will go to make the movie closer to completion.

See a graph below of the rise of third payer systems and costs. If that isn’t a pattern, I don’t know what is. 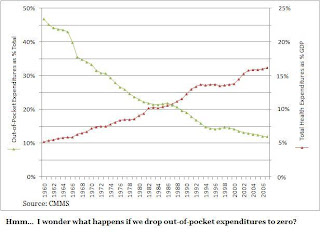 Click below to get the full interview. Also please consider donating to the cause.  Its worth it.