Unemployment: We are at Depression Era levels 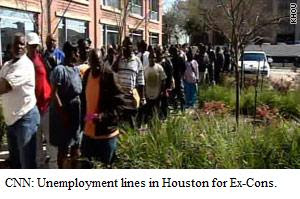 As we reported two weeks ago, unemployment is higher than it was in 1931, using the reporting standards they used (http://bit.ly/c4QGUz).  We reported 17.3% after adding the underemployed and discouraged workers.  This number 17.3% is comparable to the numbers that they reported during the depression and is above depression era unemployment levels of 1930, 1931, 1936, 1937.

Another source is echoing our claim that real unemployment is being underreported.  IBD reports (See http://bit.ly/b0IwFZ):


If you count those who are discouraged or working part-time when they want a full-time job, the jobless rate soars to 16.8%.

Private sector employment gauges pretty much show the same thing. For instance, the pollsters at Gallup each month ask Americans questions about their employment. In February, the Gallup report shows, some 19.8% of Americans reported that they were underemployed or not employed at all.

That's one out of five workers — and even more than the 15 million unemployed estimated by the government.

Unless we act, and soon, to cut taxes and reduce the size of government, the U.S. will enter a protracted period of slow economic growth, stagnant wages, and permanently high unemployment.