By EconomyPolitics - March 04, 2010
copy bitly link - http://bit.ly/cRW259
Kelly Evans of the Wall Street Journal wrote a piece about the death of inflation (See http://bit.ly/agoHhT).  Since WSJ now charges for their articles, I will include the most relevant pieces.


The nation's money stock, known as "M2," includes physical currency, bank deposits and households' money-market holdings. The money stock's growth, which historically averages around 5% a year, has stalled over the past 18 months since the credit crisis intensified in late 2008.

The money supply contracted outright during much of January and February compared with its level 13 weeks prior, a gauge economists use to help smooth out weekly volatility.

"It shows there isn't actually a lot of liquidity out there, contrary to popular belief," says Paul Ashworth, senior U.S. economist at Capital Economics. "It's not a good sign of healthy economy."

That raises the risk of deflation in the near term, not inflation. Indeed, core consumer prices fell in January from the prior month for the first time in 28 years.

She uses the following graph to make her case (I added the circle): 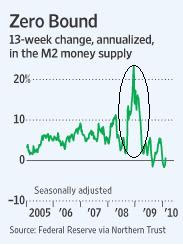 There are some fundamental criticisms that I have with her arguments.

First, inflation historically lags money supply growth by two years as it passes from the Fed to the banks to the economy.  She is looking at the current money supply growth and extrapolating that it isn't growing now and inflation is tame so the great money supply expansion will never translate to inflation.  Money supply growth by definition always leads to either broad CPI inflation or asset bubbles (See http://bit.ly/9ZH3DP), depending on whether the money get spent on things or reinvested into assets.  The circle on the graph represents damage which has already been done and will take time to translate into the real economy.

Second, inflation is not low; it is increasing.  The Fed and WSJ are clueless to the inutility of their own CPI numbers.  Stefan Karlsson, a Swedish economist has reported that inflation is much higher (See http://bit.ly/9xp3AL) than reported.

Owners Equivalent rents and actual rents make up 42% of the CPI.  That number is a bogus poll number that does not measure acutal housing prices, which is the number which they should use for the 60% of the people which own their homes. 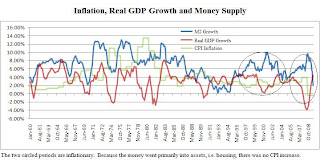 Fourth, why does she have to go to Northern trust to get her money supply numbers.  She can get them directly from the Fed herself (See http://bit.ly/aw9lhg).  You may think that this is mean spirited, but if she is reporting on M2, she might want to get the data from the source rather than filtered from another source which may or may not be the window that she needs for her reporting.
Federal Reserve Inflation