The American Patsy and Russia: Foreign Policy in Pictures II

By EconomyPolitics - April 08, 2010
“IF you've been in the [poker] game for 30 minutes and you don't know who the patsy is, you're the patsy”
Warren Buffett


...the NPT (Nuclear Power Treaty) invites multiple opportunities to cheat by insisting that all states, including those suspected of violations, have a "right" to civilian nuclear technology. 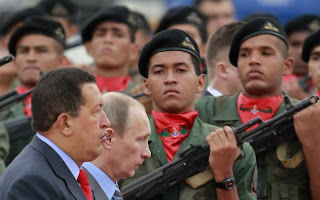 Via  The New American:

In all, the two rulers signed a total of 31 agreements during Putin’s visit. One deal in particular that prompted concern among international observers was a “statement of intent” for Russia to help the socialist Venezuelan regime build a nuclear power plant.

Via The Moscow Times:


Venezuela may spend more than $5 billion to buy Russian weapons, Prime Minister Vladimir Putin said Monday, signaling that the country is a larger market than Russia had expected. Venezuela’s spending on Russian weapons would include the $2.2 billion seven-year loan that Moscow promised to extend to Caracas in September, Putin said.

In asking for the loan, Caracas said it intended to buy several S-300 air defense systems and 92 T-72 tanks.Putin’s announcement Monday indicated that the trade might go well beyond those previous plans.

This is not a loan, but a gift as the last loan made to Chavez to buy weapons, Venezuela defaulted.
Barack Obama Foreign Policy Hugo Chavez Medvedev Putin Russia Venezuela