Goldman paid Rahm $3,000 per month for his job of "introduce us to people" while working for Clinton

By EconomyPolitics - April 20, 2010
The ties between government and Goldman are well documented. Hank Paulson came from Goldman Sachs and help bail out his old buddies of their AIG mess.  But as a whole, Goldman has been focused on the democrats.

A little known fact is that Rahm Emmanuel used to work for Goldman.  He used to work for them at the time that he was the chief fundraiser for the one William Jefferson Clinton.  Yea, I said that right.  When he was Bill Clinton's chief fundraiser, getting tons of campaign cash from Goldman and others on Wall Street, Goldman was paying him $3,000 per month for his official job of "introduce us to people".

How does one collect $3,000 per month for facilitating introductions.  I tried my luck finding that kind of job, so I searched Monster.com.  I got this back: 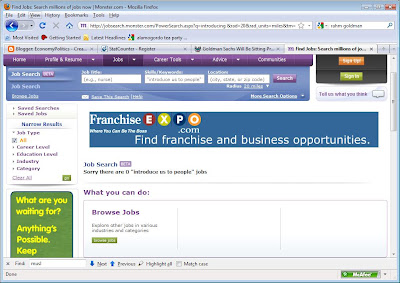 
An interesting early chapter in the Goldman-Emanuel relationship took place in the setting of Bill Clinton’s campaign for the White House in 1992. Clinton hired Emanuel as his chief fundraiser.

At the same time, however, Emanuel was on the payroll of Goldman Sachs, receiving $3,000 per month from the firm to “introduce us to people,” in the words of one Goldman partner at the time. This is certainly a noteworthy relationship, but it’s one that has almost entirely escaped scrutiny.

Corporations and partnerships are and were at the time prohibited by law from contributing to federal candidates out of the corporate coffers. So, while Rahm tapped Goldman employees personally for six figures in gifts to Clinton’s candidacy—more than any other firm—Goldman, as a company, was helping keep Clinton’s top fundraiser well-fed.