By EconomyPolitics - April 10, 2010
Get ready for Tea Party Mahem.  They think we are a bunch of racist, wife beating, Jesus Freaks. There is now a website now dedicated to crashing the tea party.  See there modus operandi as outlined below:

Some of the things that have been written at this site that you need to look for which come straight from the boards:


One of the most obvious ways we can do this is by blending in with the crowd and yelling out racist slurs like Jews, Nigger, and Fags. One of us should record the act and that should get good media coverage.

Don't forget to spit on passers by.

We're going to attend their rally, but plan to have a bunch of truly ludicrous signs. Things that say "Obama drinks Christian Baby Blood" or "Jesus wrote the constitution". The more misspelled words the better...You could also dress in overalls with no shirt, or a stained "wifebeater" t-shirt, But you get the general idea.

When reports come out of bad behavior, which it will, then get ready to do research.  Record everything.

Apparently, the website is owned by Ben Franklin himself according to godaddy.com

The address does not exist per google.  The telephone is registered to S Lamonoff of Langhorne, PA.


It looks like the poor sap didn't have the intelligence to register the website private, but may have included a real phone number.

How to Spot a Loon or Plant

Look for this guy below at the tea parties.

He fits everything of a liberal plant.  His racism, patriotism and religiosity so perfectly fit the left's image of tea partiers that it was almost cartoonish. The problem is this guy is not a plant.  He is more like a loon who feigns leadership over the tea party movement.   Whether a loon or a plant,  this kind of crap is not welcome. 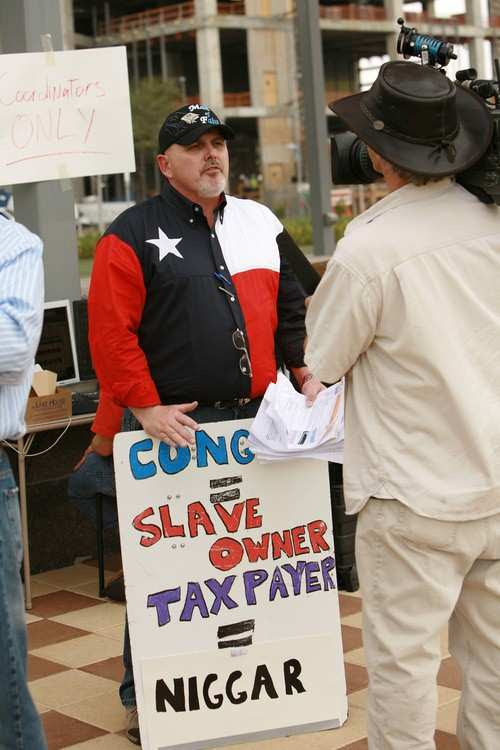 The plant will combine one or more of the following:
More

More tactics from the Rebel.

From the Examiner
Racism Tea Parties