The Yield Curve: Why so steep? 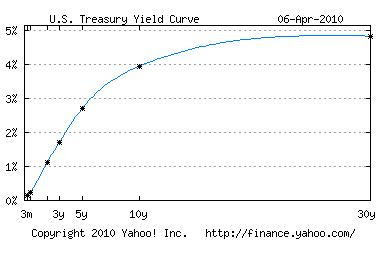 The yield curve is as steep as it's ever been.  This would suggest that equities should rally.  But the current crisis that we are in now are not the norm.  The Economist went over the possibilities for the super-steep yield curve.  I have highlighted just the main points.   What does the steep yield curve tell us.  See below:


One possibility is that the economy is heading for a vigorous recovery. ...a steep yield curve creates profitable opportunities for banks, which can borrow short-term at a low rate and lend to companies at a higher one. This time, however, a steep yield curve is hardly stimulating bank lending. Bank credit has contracted over the past 12 months.

A rise in long-term bond yields could indicate a belief that inflation is set to soar. But inflation expectations, derived from the gap between yields on index-linked and conventional bonds, hardly suggest fears of a Zimbabwe-style debasement. American inflation is expected to average just 2.4% between now and 2028.

There are other possibilities. One current technical oddity in the markets is the "negative swap spread". In the interest-rate swap market borrowers exchange fixed-rate streams of payments for floating ones (or vice versa). The floating rate is often based on LIBOR, the rate at which banks borrow from one another. The fixed-rate element normally carries a higher yield than that of Treasury bonds with the same maturity.

A more likely explanation is the sheer volume of bonds being issued. These bond issuers would rather swap their fixed-rate obligations for floating-rate ones. So they have to pay a floating rate and receive a fixed one.

...the most plausible explanation for the steep yield curve is the interaction of monetary and fiscal policy. On the monetary side the Fed is holding short rates at historically low levels in response to the severity of the crisis. On the fiscal side America's budget deficit has soared to over 10% of GDP, leading to heavy debt issuance. Recent Treasury-bond auctions have seen fairly weak demand, forcing yields higher.