Argentina's Journey down the road to monetary ruin 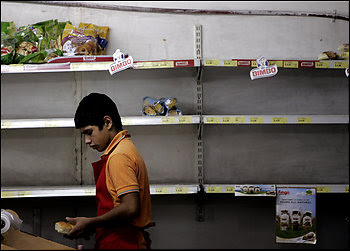 Following her counterpary in Venezuela, Cristina Kirchner decided long ago that market intervention was the way to go.  There are two stories which detail some of the things which are going on in Argentina and believe me, they are going to end up with the country poorer.  Via FT:


The government’s tough interior trade secretary, Guillermo Moreno, has told supermarkets they can no longer import foreign foods that can be produced at home – so it will be adiós to Spanish hams, au revoir to French cheese and Swiss chocolate, and arrivederci to Italian pasta and olive oil, among other items considered luxuries.

The government fears the Greek crisis, which has weakened the euro, could trigger a flood of cheap food imports. However, one representative from the industry, who asked not to be named, said Mr Moreno had been threatening the ban since before the latest market turmoil.

If the aim is to keep down prices, it could well backfire as local producers may hike costs without competition from foreign producers. Ecolatina, a consultancy, says food prices already jumped 15 per cent between December and March, the biggest rise since 2002, and inflation overall is expected to be at least 25 per cent this year, way above the discredited official data.

We are already seeing the effects of this among other policies that this has created.  Inflation in Argentina is about 25% per year which puts her and Hugo Chavez in a league of their own.  Argentina has the second highest inflation in the world.  Via Bloomberg:


Economists, including former central bank President Alfonso Prat-Gay, say annual price increases are more than 25 percent, which would make Argentina’s inflation rate the second highest in the world behind Venezuela. Both countries would take the inflation crown from Zimbabwe, where prices climbed 500 billion percent in 2008, according to the International Monetary Fund, before slowing last year. Argentina’s statistics agency said prices rose 9.7 percent in March from a year earlier.