Obama approval rating down to 42% 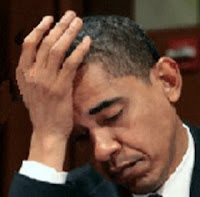 According to Rasmussen, President Obama's approval rating is down to its lowest level.http://bit.ly/aVGsVV EconomyPolitics has been working hard to identify who those 42% are, but have yet been unable to find many willing to admit their support of the President. We have spotted some partially scraped off bumper stickers from the 2008 elections and one faded Obama T-shirt was seen being donated to Goodwill.

But seriously folks...let's take a look at who is support or not supporting the President. Certainly, many Democrats facing elections in November have distanced themselves from the embattled President. For example, the race for the late Congressman Murtha's seat was about who supported Mr. Obama's policies less. http://bit.ly/cUeKMg Obama's policies are not popular...in fact, some would argue that they defy reason and logic.

Maybe before looking outside the box, Mr. President, it is a good idea to look in the box for solutions (i.e. the government's handling of the BP oil spill in the Gulf). Over the last year and a half, Obama has been on the ropes from national defense and security, to the economy. Yes indeed, unlike his Nobel Prize, Obama is earning this low approval rating with every move he takes.

A line from a movie I like, Home Alone, sums up the sliding trend of the President's approval rating downward: Mr. President you're what the French call les incompetents.