What if Conservatives were to show up with the numbers the Pro-illegal immigration Crowd did today? 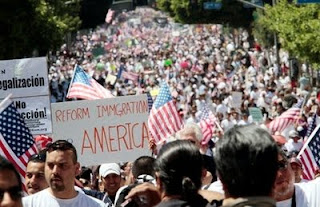 Take a look here at an AP report on the numbers that came out to protest Arizona's new law given law officials more tools to deal with those in their State illegally http://bit.ly/aS43qD These folks are protesting against American's in Arizona who want the Federal government to do what a portion of the taxes we pay are meant for...secure the borders and regulate who enters, leaves and resides in the United States for the security of all.

But as I see the pictures and read the numbers that showed up, I can't help wonder why can't Conservatives show up in these numbers? Why weren't we out in counter-rallies today? Sure, I know...we have jobs we have to go do...but it's Saturday for crying out loud!!! Are we the majority that we think we are? If we are why don't we show the solidarity of these folks, people who are standing up for the ridiculous and illogical cause of letting people that broke the law by entering the United States remain here and continue to flow into the United States. Is our cause not as urgent? Sure we have the Tea Parties, but 50,000 in Los Angeles dwarfs many if not all Tea Party protests.

In her book, The Forgotten Man: A New History of the Great Depression, Amity Shlaes challenges Franklin Roosevelt's use of the term "forgotten man." Roosevelt used the term to define those at the "bottom" of "economic pyramid." Shlaes points out that Roosevelt redefines the term, although not likely knowingly, to push an ideology. Roosevelt mentioned the forgotten man in a speech as governor of New York in 1932. Shlaes' book focus' on the likely source of FDR's reference to the forgotten man in his speech, Forgotten Man by William Graham Sumner. The relevant potion reads,

As soon as A observes something which seems to him to be wrong, from which X is suffering, A talks it over with B, and A and B then propose to get a law passed to remedy the evil and help X. Their law always proposes to determine what C shall do for X or, in the better case, what A, B and C shall do for X. As for A and B, who get a law to make themselves do for X what they are willing to do for him, we have nothing to say except that they might better have done it without any law, but what I want to do is to look up C. I want to show you what manner of man he is. I call him the Forgotten Man. Perhaps the appellation is not strictly correct. He is the man who never is thought of. He is the victim of the reformer, social speculator and philanthropist, and I hope to show you before I get through that he deserves your notice both for his character and for the many burdens which are laid upon him.

The Tea Party movement is about C, the real forgotten man. The guy who is paying in diverse ways to sustain X. This is great but the Tea Party is in its infancy as movements go. The Tea Party rallies should be much bigger, even though I'll admit that the growth and very existence of the Tea Party is encouraging. But why aren't their more at Tea Party rallies? Why aren't their more grass root conservative movements like the Tea Parties? Why have the Cs allowed A and B to run amuck for the better part of 70 years in indifference to the effects of legislature written by A and B for the benefit of X? There are far too many Cs out there that don't speak up. Well, America, A, B, and X were out in force today...again.


We Cs must encourage each other and our neighbor Cs. We must become less apathetic. We can no longer "farm out" our responsibilities as "We the People" to career politicians and bureaucrats. We have to drop the attitude that we don't know anything about politics and stop using that excuse to not get involved. We can't let others decide what goes on in our community. That isn't how it works.

Do you ever stop and watch that local channel in your cable line up that airs city council meetings where the public addresses the council? If you make it a point to watch, you'd be horrified by who actually take the time to prepare their ideas and then get the chance to influence your city leaders. You would feel an urgency to get down to city hall to voice opposition. But for one reason or another, we don't do it. Can you imagine if we did?

So think about it. If you aren't active in government, if you don't do your part to be heard, if you don't add your two cents, what is your government going to think is the will of the people? The only comments from the public they will be able to rely on are those from the crazy loons that make the effort to do things like: attend city council meetings, write a letter or phone call to a state or US representative or senator, or get out in big numbers at rallies.

We can all do more. Do we all need to be doing it all? No. If each C were simply to do something we would make a strong collective and a strong voice for true freedom. We would no longer be subject to the protests of others. The squeaky wheel gets the grease.

So, talk to your neighbors about what is going on locally and nationally. Send $10 to a candidate. Send $1 to 10 candidates. Write a brief letter to the editor. Write your opinion of the days events on Facebook or Twitter. Volunteer for a campaign. Find out how to know what your city council is up to, then get down to city hall to comment. Reread a book on American History. Read the Constitution once a month. Do something and remember that it is still cool to be patriotic.

This isn't limited to government. What about movies you disagree with? Most of them have liberal propaganda and immoral messages in them. Write a company and tell them what you think about having to Press #1 for English. Write to a store in the mall and the mall management object to lewd material in shop windows. Whatever it is, just take a moment to write out a letter or make a phone call.

If you can't find inspiration out there in the world...look for the inspiration inside yourselves and in your family and start inspiring others. Just do something America...if you were waiting for the time to be heard...this is it.
Conservatism Immigration Protests Taking a stand Tea Parties