The Year of the Elephant 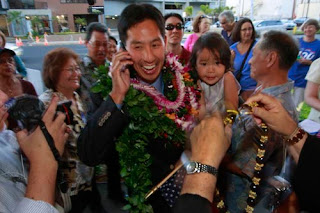 The GOP picks up another win and this time it is on Obama's home turf...home district even!!! Charles Djou has won a seat in the United States House of Representatives in the 1st Congressional District of Hawaii. This is the first time in 20 years that a Republican has led the District. Maybe we can't get Obama to cough up a birth certificate but we can send him a message by winning the district where he was born. About the win Djou comment,

The win may not last as Djou will face a Democrat again in November and, unlike this election where two Democrats were running against the Republican, that Democrat will be running alone against DJou. No matter what the pundits might say about this win, it is a boost for the GOP movement to get back in the game this year. What does this win mean to Obama? Does this mean the Democrats are divided? Does this mean that Obama and Congress have taken us too far left? So far that not even those who may have voted for Obama before are regretting that vote? Are they telling the President that they are not willing to go to the extremes the President is headed with the country?
Barack Obama Djou Elections 2010 Hawaii Republicans