Eastern Canada and US shaken by earthquake

Where would be the last place on Earth that you would like to be during an earthquake? I was at the CN tower with my kids eating at the restaurant which rotates in the tower above. When I felt the building shake. I looked over at my wife, "It must be the wind. I bet this building shakes because of the wind sometimes." "Or maybe the track that the restaurant rotates upon needs some work"

Boy was I wrong via Globe and Mail:

The epicentre of the quake was in Quebec, about 38 kilometres north of Cumberland, Ont., which is on the Ottawa River, according to the U.S. Geological Survey, and struck at 1:41 p.m. EDT at a depth of 18 kilometres.

There have been two recorded earthquakes with a magnitude over 6.0 in the Western Quebec seismic zone: a 6.1-magnitude quake in 1935 and one measuring 6.2 in 1732.

Map via US Geological survey: 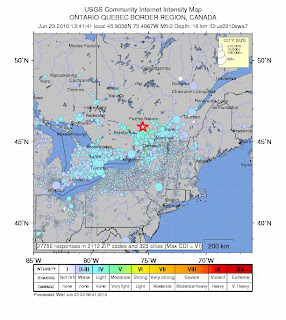