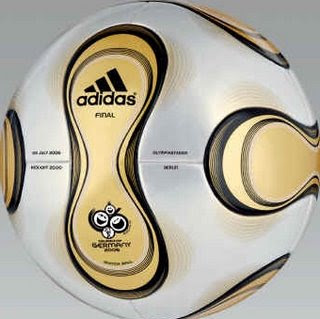 As World Cup Fever captures the world, America watches Jeapardy.  Don't get me wrong, I love the sport.  I was hooked when I got the chance to watch Barcelona take on the Celtics of Scotland.  It was very exciting to watch, but half of the fun was all the singing and drinking in the crowd. That is something that is very hard for American's to understand.  It is kind of like American baseball.  Unless you've actually been to a game, and played a bit, you wouldn't get the game and would probably be bored to death watching on TV.
How Americans view Soccer
There are two images that cross the typical American's mind when you mention soccer.
First, it's a kids game that everyone likes to play as a kid.... and then they grow up and play a real man's sport like American Football.

Second, its just a wussy sport that they play in Europe

Either way, you have to have America catch the fever.  That process must be facilitated.  I have my own suggestions on how to make it more exciting.
Score more points
1)  Eleven guys on the field make it hard for anyone to score.  Take out two and have the field open up a bit more.
2)  Widen the net by three feet.
3)  Scrap the offsides rules.  I think a team should always have a guy down there as a cherry picker.
More Contact
Nothing is lamer than watching a guy get tapped on wrist and have the guy flop.  In America, if the opponent goes down, you did something right.
4)  Discourage fighting, but only mildly.  Hockey guys duke it out as long as it doesn't clear the bench.  Of course they get a penalty.  Wink Wink!!  It is pretty lame, when the English soccer fighters are the tuffest guys in the stadium and the biggest wusses are on the field.
Penalty Kicks
5)  They are too easy and too based upon luck.  If there is a penalty near the goal, take two guys off the offending team.  That will be a huge advantage for the good guys, but not be a gimme that encourages floppers.
6)  If there is a draw after an overtime, take four guys off the field.  If after five minutes, no one has scored, take another two guys off the field every five minutes until it is four on four.  That is a real test of skill and endurance.  The first person to score wins
Bottom Line
In most circles, my suggestions are taken as blasphemy, which is ok with me.
The world is probably not going to change just for America.  MLS is a start, but Beckham was out for way to long to have a lasting effect.  It will take a generation to build the enthusiasm that way.  It  would help to have a Cup here just to get a taste of the passion (women's cup doesn't count).  Or if we had team that didn't get eliminated so quickly, we might follow the Cup to completion.
Go Team USA!!!