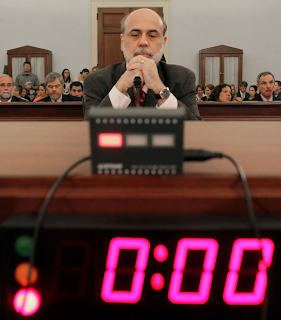 "Although fiscal policy and inventory restocking will likely be providing less impetus to the recovery than they have in recent quarters, rising demand from households and businesses should help sustain growth. "

"In particular, real consumer spending appears to have expanded at about a 2-1/2 percent annual rate in the first half of this year, with purchases of durable goods increasing especially rapidly. "

"However, the housing market remains weak, with the overhang of vacant or foreclosed houses weighing on home prices and construction. "

"In contrast, spending on nonresidential structures--weighed down by high vacancy rates and tight credit--has continued to contract, though some indicators suggest that the rate of decline may be slowing."

"An important drag on household spending is the slow recovery in the labor market and the attendant uncertainty about job prospects. After two years of job losses, private payrolls expanded at an average of about 100,000 per month during the first half of this year, a pace insufficient to reduce the unemployment rate materially. In all likelihood, a significant amount of time will be required to restore the nearly 8-1/2 million jobs that were lost over 2008 and 2009. "

"Inflation has remained low. The price index for personal consumption expenditures appears to have risen at an annual rate of less than 1 percent in the first half of the year. Although overall inflation has fluctuated, partly reflecting changes in energy prices, by a number of measures underlying inflation has trended down over the past two years. The slack in labor and product markets has damped wage and price pressures, and rapid increases in productivity have further reduced producers' unit labor costs."

"Most participants projected that inflation will average only about 1 percent in 2010 and that it will remain low during 2011 and 2012, with the risks to the inflation outlook roughly balanced. "

"Like financial conditions generally, the state of the U.S. banking system has also improved significantly since the worst of the crisis. Loss rates on most types of loans seem to be peaking, and, in the aggregate, bank capital ratios have risen to new highs. However, many banks continue to have a large volume of troubled loans on their books, and bank lending standards remain tight. With credit demand weak and with banks writing down problem credits, bank loans outstanding have continued to contract. "

"Importantly, our broad-based programs achieved their intended purposes with no loss to taxpayers. All of the loans extended through the multiborrower facilities that have come due have been repaid in full, with interest. "

"In addition, the Board does not expect the Federal Reserve to incur a net loss on any of the secured loans provided during the crisis to help prevent the disorderly failure of systemically significant financial institutions. "

"Compared with the period just before the financial crisis, the System's portfolio of domestic securities has increased from about $800 billion to $2 trillion and has shifted from consisting of 100 percent Treasury securities to having almost two-thirds of its investments in agency-related securities. "

"In addition, the average maturity of the Treasury portfolio nearly doubled, from three and one-half years to almost seven years. The FOMC plans to return the System's portfolio to a more normal size and composition over the longer term, and the Committee has been discussing alternative approaches to accomplish that objective. "

"Last week, the Congress passed landmark legislation to reform the financial system and financial regulation, and the President signed the bill into law this morning. That legislation represents significant progress toward reducing the likelihood of future financial crises and strengthening the capacity of financial regulators to respond to risks that may emerge. "
Ben Bernanke Federal Reserve