By Simon Roberts, Punk - July 14, 2010
Charlotte McCourt died July 8th and used her obituary to atone for her past support of Harry Reid. Damn that's punk rock!  Via LVRJ:

Election 2010 has just heard from a member of the Silent Majority.

You know, from a deceased person.

Chances are good you never met Charlotte McCourt during her 84 years, but I’m willing to bet you’ll be hearing about her in the coming days now that her obituary has taken Senate Majority Leader Harry Reid to task. It’s the kind of small story that has the potential to ricochet like a bullet through the campaign showdown between incumbent Reid and Republican challenger Sharron Angle.

Not because McCourt, who died July 8 after a long illness, was a political player or business powerbroker, but precisely because she was neither of those things. She was a homemaker, proud mother and grand mother and wife of 67 years to Patrick McCourt.

And she was at one time a loyal supporter of Harry Reid.
Her obituary, printed in Tuesday’s Review-Journal, reads in part, “We believe that Mom would say she was mortified to have taken a large role in the election of Harry Reid to U.S. Congress. Let the record show Charlotte was displeased with his work. Please, in lieu of flowers, vote for another more worthy candidate.” 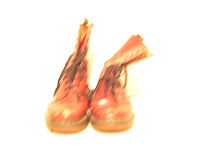