By EconomyPolitics - July 14, 2010
As the NAACP is putting together a resolution calling the Tea Party racist.  Asking tea party members to repudiate racism and to root out racists elements within the tea party.  Most tea partiers are scratching their heads.  Huh...via ABC news:


In March, Tea Party protesters opposing the health care bill were alleged to have shouted racial slurs at black House members in the halls of Congress, a charge that Tea Party supporters say has not been proven. Liberal blogs have also seized on signs that have appeared in Tea Party protests, comparing President Obama to a monkey.

Tea Party leaders say the charges are misguided and are being fertilized by the left for the sole purpose of gaining political ground.

The Rev. C.L. Bryant, a former president of NAACP's Garland, Texas, chapter who is now a leading Tea Party activist said the idea that the Tea Party is racist or is trying to instigate a racist climate is "simply a lie."

"I have seen posters ... where every president from Reagan to Obama has been called a fascist," Bryant, who serves as a contributor to FreedomWorks, which organizes Tea Party groups, told ABC News. "Why is it that just because we have a black president, we are hyper-sensitive to posters at rallies?"

The NAACP wants to "create a climate where they can say that those on the right are in fact racist and those on the left are their saviors," he added. "This is very much what the liberal agenda is about."

If we hold the G20 protest to the same criteria as the Tea Party is held... 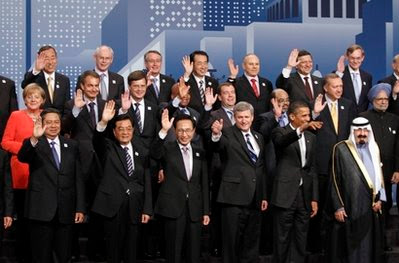 Meet the G20.  They include 2 blacks, several Asians, Muslims and even Asian Muslims. They are an incredibly diverse group a fact that is not lost on the protestors themselves.

Most damaging is the obvious assertion that the Protestors are overwhelmingly lilly white.  Toronto is one of the most diverse cities in the world. As of 2006, 46.9% of the residents of the city proper belong to a visible minority group per wikipedia, but the rioters were overwhelmingly white! The only visible minorities are relegated to holding the cameras.

I did see a couple of blacks in the audience.  We attempted to interview them to ask them how comfortable they feel in such an overwhelmingly white audience where they are protesting the G20 which has a large number of Blacks, Asians and Muslims.   See Below:

Let's play the game Where's Waldo.  But instead of Waldo, we will play find the minority.

Can't see one there 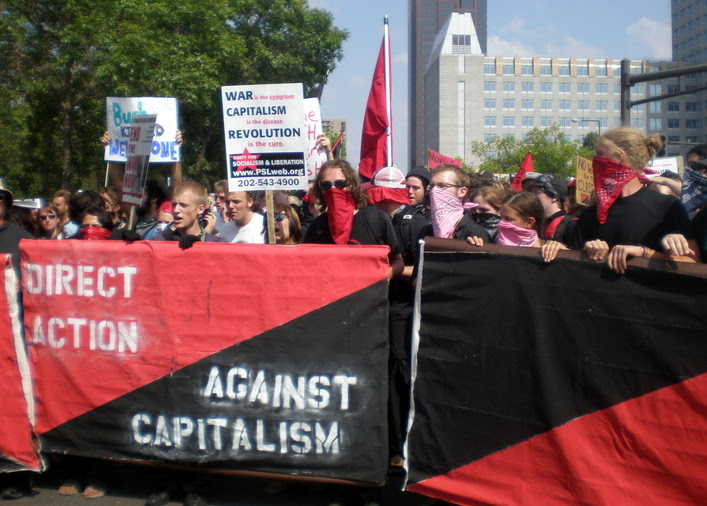 There could be one in the front, but not sure

I give up.
Real Racism at G20 Protests 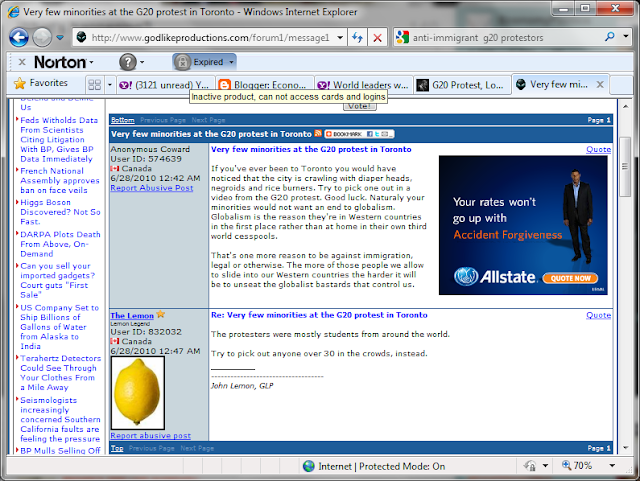 Here is a quote right from a protestor at the G20.  They apparently were protesting all the ethic groups and railing on immigration.  They were making the obvious assertion that there were no minorities at the protests and that it was good.

Here is another G20 protestor from a prior G20 in London.  Many of the people who go to the London protests are going to be at the Toronto protests.  See the original via charliebarnwell.  So we have the violent anarchists and the Nazis all in the same group. 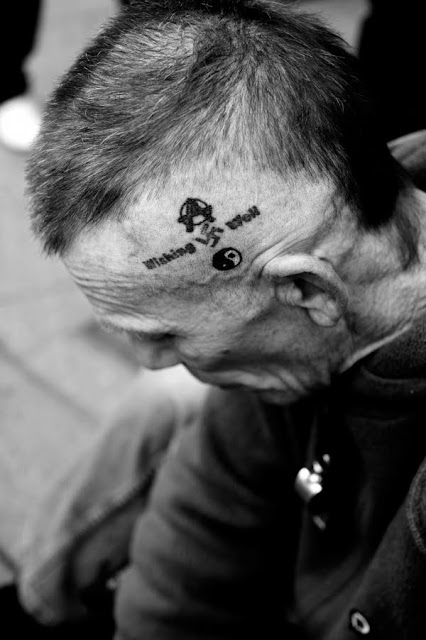 Now we need the NAACP
I'm glad we have the NAACP out there to watch for racism.  They were good at spotting it in the tea party movement.  I'm sure they will condemn at the G20.
But Seriously
Racism is bad.  Violence is bad.  There were some people with racist signs at the tea parties, like this guy below.
The difference between the tea party movement and the protest from the left is that this guy gets kicked out where the loons on the left get overlooked or even cheered.  If there are people yelling racist slogans at the tea parties, they get kicked out.

If massive violence took place at the tea parties like they did at the G20 riots, the tea partiers would put a stop to it.  After all, they have guns.
g20 Racism Tea Parties