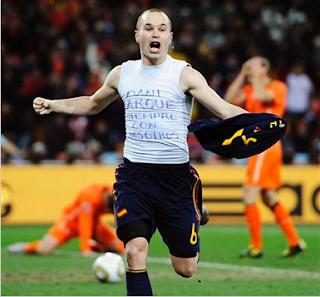 This shouldn't be too much of a surprise.  We all know that markets can be wrong, but more often than not they aren't.  As we wrote in an earlier post Las Vegas odds say Spain was most likely to win.  Market said that Spain would win.  This time it worked.

It came after an exhausting 1-0 victory in extra time over the Netherlands on Sunday. Two years after winning the European title, the stylish Spaniards did even better.

This was a physical test of attrition that sometimes turned dirty -- a finals-record 13 yellow cards were handed out and the Dutch finished with 10 men. In the end, it was Andres Iniesta breaking free in the penalty area, taking a pass from Cesc Fabregas and putting a right-footed shot from 8 yards just past the outstretched arms of goalkeeper Maarten Stekelenburg.

For the Dutch and their legions of orange-clad fans wearing everything from jerseys to jumpsuits to clown gear to pajamas, it was yet another crushing disappointment.

Their first World Cup title tantalizingly within reach, they failed in the final for the third time. This one might have been the most bitter because, unlike in 1974 and 1978, the Netherlands was unbeaten not only in this tournament, but in qualifying for the first World Cup staged in South Africa.

Soccer City was soaked in Oranje, from the seats painted in that hue throughout the stadium to pretty much everyone seated in them. Unlike when they lost to hosts West Germany and Argentina in previous finals, the Dutch were something of a home team this time.

The Spaniards, though, were the winners.

They had pockets of supporters, too, to be sure, dressed in red and scattered around the stadium. They might have been the minority, but when the final whistle blew, they were tooting their vuvuzelas loudest in tribute to their champions.

Iniesta tore off his jersey after the goal and raced to the corner where he was mobbed by his teammates. Several Dutch players wiped away tears as they received their medals as runners-up -- yet again. They won every qualifying match and all six previous games in South Africa before the bitter ending.

The Netherlands now has more victories in World Cup games without a title than any nation: 19. Spain held that dubious record with 24.

The Spaniards saluted their fans with arms raised high, then lifted their coach, Vicente Del Bosque, in the air in celebration.

Goalkeeper Iker Casillas, the captain, accepted the trophy from FIFA president Sepp Blatter, kissed it and raised it for all to see while cameras flashed and confetti flew throughout the still-full stadium.

Soon, the entire team and staff gathered at midfield for a group photo. The players bounced up and down to the World Cup theme song, then took a victory lap as the trophy was passed to each member of the squad.