AIG recap: Will the taxpayers ever get their money back? 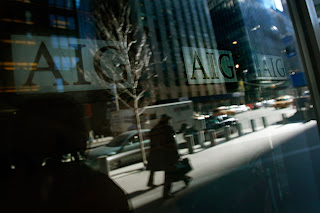 AIG has published their quarterly earnings.

They are finally making money now. Everyone should be happy about that, even those that were against the bailout, via AIG:

The total outstanding debt and equity assistance given by the government is $132.1 billion. Of that amount, the amount requiring repayment from AIG to taxpayers is $101.2 billion. The difference between the $132.1 billion in government assistance outstanding and the $101.2 billion debt and equity balance requiring repayment is attributable to the $30.9 billion outstanding on the Maiden Lane II and III loans as of June 30, 2010.

Recap of the amount outstanding, via AIG:

EQUITY: U.S. Dept. of Treasury TARP Shares were issued to pay down the FRBNY Revolving Credit Facility. These shares were later exchanged for TARP Series E noncumulative preferred shares. Unpaid dividends on the series D shares were added to the liquidation preference of the Series E shares. As of June 30 2010, the balance outstanding on the series E shares was $41.6 billion.

EQUITY: Preferred Interests in AIA and ALICO Held by FRBNY: In December 2009, AIG transferred to the FRBNY preferred equity interests in newly-formed special purpose vehicles (SPVs) in exchange for a $25 billion reduction of the balance outstanding and the maximum credit available under the FRBNY Credit Facility. As of June 30, 2010, the equity balance outstanding was $25.6 billion.

The debt to equity swaps that the FRBNY has done has hidden the true nature of the problem. Looking at strictly the current earnings and ignoring the restructuring plans, it will be next to impossible for the taxpayers to be paid back with a return above inflation. AIG probably will be able to eventually payoff the 26.5 Million. Their quarterly earnings are at roughly 1BB which means it would take approximately 7 years for the taxpayers to get repaid with a 6% interest rate if all of their earnings were diverted into debt repayment. If only half of their Earnings go to debt repayment, then it will take approximately 15 years.

If we take all earnings and plug back into debt reduction, in seven years we have a company which is approximately worth 56 Billion if we have a discount rate of 10% with a 2% growth rate. The taxpayers aren't getting paid back this way.

As of today we are owed 26.5 in debt and 75 Billion in equity. Let`s adjust our amounts by expected transactions.  If we look at the actual expectations of future sales we will see continued issues, via AIG:


• ALICO: AIG announced on March 8, 2010 a definitive agreement for the sale of American Life Insurance Company (ALICO), one of the world's largest and most diversified international life insurance companies, to MetLife, Inc. (MetLife) for approximately $15.5 billion, including $6.8 billion in cash and the remainder in equity securities of MetLife, subject to closing adjustments. The cash portion of the proceeds from this sale will be used to reduce the liquidation preference of the Federal Reserve Bank of New York (FRBNY) in the special purpose vehicle formed by AIG and the FRBNY to hold the interests in ALICO.

So we reduce the taxpayers' equity stake by 15.5 to 60 Billion, but now taxpayers hold 8.7 Billion dollar stake in MetLife.


• PineBridge Investments: AIG announced on September 5, 2009 that it had entered into an agreement to sell a portion of its investment advisory and asset management business to Bridge Partners, L.P., a company owned by Pacific Century Group (PCG), the Hong Kong-based private investment firm. PCG paid $277 million at closing, and AIG expects to receive additional future consideration that includes a performance note and a continuing share of carried interest.

Difficult to say but let`s be generous and say the total value is 2 Billion which reduces our equity stake to 56 Billion.


• AIG (Finance) Hong Kong Limited: On August 12, 2009 AIG announced that it had entered into an agreement to sell 100 percent of its shares of AIG Finance (Hong Kong) Limited ("AIG Finance") to China Construction Bank Asia for $70 million in cash, subject to typical closing adjustments, plus the repayment of intra-group indebtedness and deposits of approximately US$557 million. CLOSED October 29, 2009

There are other transactions mentioned on their website, but as these are closed, they should already be included in this figure.

The 55 Billion that is still owed the taxpayers is almost exactly equal to what the company is worth at the end of seven years. However, the assumption which is being made is that the pieces that are being sold off will not materially be affecting earnings. That assumption is highly unrealistic.

So from the companies own financial statements, it should be clear that AIG will begin paying back the money which it is owed. However, that the taxpayer gets paid in full out of this seven headed beast is a pipe dream.

Three or four years down the road we will hear that the AIG rescue was effective and the taxpayer received all the money owed. Don`t buy it.

The debt will likely be repaid. The equity will likely never get even half paid down. But since it is equity, it doesn`t have to. It was an accounting sleight of hand which landed Jeff Skilling of Enron in jail. Debt to Equity swap? I`ve heard that one before.

Oh yeah and just for the record. For everyone who says that letting Lehman go under was terrible and caused the market to tumble, I have two questions: How much did the taxpayers spend to bailout Lehman? And How many of Lehman's counterparties went bankrupt? The answer to both of those questions is Zero.
AIG Bailout Earnings TARP Taxpayers