Barney Frank wants to Kill Fannie and Freddie: Subsidies don't work and they are not even necessary 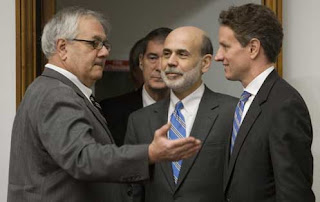 Barney Frank sees the light.  There are moments in government where liberals do get it.  Charles Rangel was a big supporter of the Trade Pact with Colombia and actually opposed Pelosi's efforts to permanently kaibosh it.  Then, he went back to his old self and now is trying to avoid going to jail.  Barney Frank won't be long until he goes back to his usual arrogant self.  But, while he is here, we ought to take the opportunity to put Fannie and Freddie to rest and stop the US government's perverse attempt to force uncreditworthy borrowers into a home they can't afford.

We prefer no subsidy for homeownership, not least because the painful experience of the last 40 years is that such policies lead to boom and bust and awful economic harm. Canada has neither a Fannie Mae nor a mortgage-interest tax deduction, and yet its homeownership rate is higher than America's. The homebuilder-Realtor-mortgage banker lobby will object, which is no doubt why Treasury chief Tim Geithner continued to call for some federal role in guaranteeing mortgages at his housing finance gabfest this week. But that road inevitably leads to the Son of Fannie.

Working as a mortgage trader in Canada, I understand the ins and outs of the Canada mortgage system.  Canada has no housing GSEs, mortgage interest is not tax deductible and it doesn't even have a 30-year fixed rate, freely prepayable mortgage loans.

Mortgage lending is more conservative and much more creditor-friendly.  Mortgage loans are recourse loans, which is different from the states where mortgage loans are typically recourse, meaning you can mail the keys back to the bank if you get upside down and they can't come back to the borrower.  In Canada, they will garnish your wages and take your house.

All of that make home ownership a worse deal than it is in the states.  Yet, they have just as high homeownership.

The home ownership rate in Canada: 68%. In the U.S. it's 67%. The U.S. rate peaked at the top of the housing bubble at 69%. In other words, two very different housing finance systems, one much riskier than the other, produced virtually the same home ownership rate.  Why do we continue to subsidize?

Oh and Germany only has 40% homeownership, yet their communities aren't exactly disintigrating (well maybe Berlin).

Run with that Barney Frank!!