Freddie Mac lines up for more money from US taxpayers 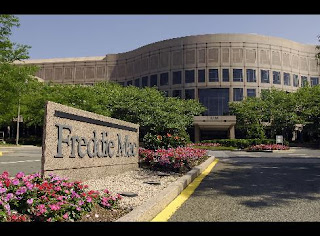 The endless holes which are Freddie Mac and Fannie Mae are proving their capacity to devour large sums of taxpayers money.  Where this ends is anybody's guess.  Some of the cash recipients are proving their rescue was fatal.  GMAC is now no longer necessary for GMAC to do business.  GM, I mean US taxpayers, have purchased their own financing unit.  I guess GMAC wasn't so mission critical after all.


Fannie and Freddie will never repay their taxpayer loan, I mean gift. They are lining up again, via Reuters:

Mortgage finance giant Freddie Mac on Monday said it would need another $1.8 billion in aid from taxpayers, bringing its total request since it was taken over by the government two years ago to more than $64 billion.

The second largest U.S. residential mortgage funds provider reported a loss of $6.0 billion, or $1.85 per diluted share, in the second quarter, including a $1.3 billion dividend payment to the government.

That compares with an $8.0 billion loss in the prior quarter and is the best three-month performance in a year. The firm lost $840 million in the second quarter of last year.

The company said losses stemmed primarily from loans purchased or guaranteed between 2005 and 2008.

The U.S. Treasury took control of Freddie Mac and its sister entity, Fannie Mae, at the height of the financial crisis in 2008 as loan losses mounted.

Since the government takeover, the two firms together have requested close to $150 billion from the government's unlimited credit line, scheduled to expire at the end of 2012.

The plan to put Freddie Mac and Fannie Mae into conservatorship was meant to be temporary.

But nearly two years later, Treasury Secretary Timothy Geithner has only just begun the process of figuring out how to overhaul the U.S. housing finance system.

Geithner has called for a conference on the future of housing finance to be held at the Treasury later this month.